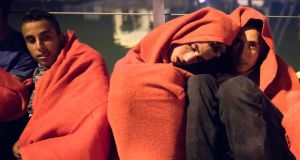 Moroccan migrants rest at the port of Barbate after 163 migrants, including 50 children, were rescued from the Strait of Gibraltar on Friday. Photograph: Marcos Moreno/AFP/Getty Images

Migration across the Mediterranean is in the news again, as numbers approach last year’s peaks and host countries such as Italy demand more solidarity from the European Union.

We hear of this through the media, from volunteer workers such as Conor Kenny, who works with Médecins Sans Frontières, and sometimes from individual refugees.

All too often in the media complexity is oversimplified and the migration experience reduced to stereotyped images.

Media narratives tend to cluster around two poles: of emotional and highly-charged reporting on the plight of migrants as victims; and on the story of numbers, and the potential threat migrants pose to the security, welfare and cultural standing of host communities. Over time, the second narrative crowds out the first – despite many excellent exceptions.

Much reporting is laced with prejudiced terminology referring to waves, invasions or illegals.

The context of crises in origin counties of sub-Saharan Africa such as Sudan, Ethiopia or Nigeria is usually ignored or overlooked by media lacking the training and resources to report more deeply.

This week Unicef reported, for example, that 12 million people (seven million of them children) are on the move in central and western Africa, driven by state violence, poverty and climate change. Most find refuge in neighbouring states, one in five comes to Europe.

Few media outlets regularly address broader issues, such as remittances, diaspora networks, the challenges of migrant children’s education, or human trafficking. Migration is part and parcel of globalisation, yet is rarely seen in that context. Nor are the specific problems facing transit countries in North Africa such as Libya, Egypt or Tunisia properly analysed.

These are among the conclusions of a major research project by the Ethical Journalism Network into how media in 17 European, North African and Middle Eastern states reported on the migration crisis in 2015 and 2016, now available online.

The report, unusually, is by and for journalists and policymakers, rather than by academics studying media behaviour, giving it greater insight and credibility for media practitioners.

These are valuable studies surveying the problems facing individual states confronting migration from the Syrian crisis as well as the sub-Saharan one. Most media accounts are nationally focused, they show.

Case studies of good and bad reporting abound, illustrating the difficulties faced by journalists struggling to report and explain a new and complicated phenomenon. While most media try to avoid racist and hate speech, others say it distorts reality not to report expressions of these responses.

Usually they originate not in mainstream printed or broadcast media but in political, popular and social media movements and discourse.

Social media and online sources often influence media coverage and encourage a “rush to publish” through the dissemination of rumour, speculation and alarmist information that feeds fear and ignorance among the public at large.

That stokes the widespread sense reported here that while journalism matters, it has lost trust and must “regain the power it has lost as a credible gatekeeper and a respected framer of one of the most crucial stories of our time”, as Jean-Paul Marthoz puts it in his critical chapter on France.

A good example of how battles over media framing work is given in the chapter on Hungary by Balazs Weyer. Older Hungarian words for refugee such as menekult were replaced in official and state media usage by a new word for migrants coined from Latin and sounding foreign and ugly compared to the older, more empathetic ones.

As Weyer puts it: “This led to a situation where using any of the older terms became a political statement even if it wasn’t meant to. As a result, unbiased reporting became almost impossible. No words were left untouched by this war of rhetoric.”

Media observatories have an important role to play in analysing coverage

Similar battles over terminology and framing are reported from Algeria, Tunisia and Egypt. The report bears detailed reading by journalists and policymakers as well as the general public concerned with these issues. Its spirit of self-criticism and reflection helps stimulate a valuable discussion of how media can improve reportage and understanding of migration.

Measures discussed include better training, working conditions and cultural awareness among journalists, appointing specialists and encouraging national and international networks of correspondents, including among migrant communities themselves.

Media observatories have an important role to play in analysing coverage. Policymakers are encouraged to create space for tolerance and dialogue with and among journalists and editors.