World View: All change in the multipolar world 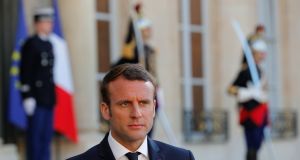 Emmanuel Macron: the French Gaullist tradition of asserting multipolarity against the US is being resurrected in his encounters with Donald Trump. Photograph: Philippe Wojazer/Reuters

“It is the birth certificate of a multipolar world.”

President Donald Trump’s decision to withdraw from the Paris climate accord was aptly characterised as such by Francois Delattre, France’s ambassador to the United Nations, this week.

He spoke after Angela Merkel said Europeans can no longer completely depend on the United States and the United Kingdom as allies after Brexit and Trump’s failure to publicly endorse Nato’s article 5 solidarity clause. China and the European Union jointly pledged to support the climate accord in another indication of shifting global power relations.

Poles are centres of world power, dominance or hegemony. Since the end of the Cold War, twin power or bipolar system between the US and the Soviet Union, we have lived through a unipolar period when the United States enjoyed an unchallenged worldwide supremacy in the 1990s, through its loss of that dominance in the Iraq invasion and long Afghan war, together with the emergence of China as a huge economic force and increasingly assertive political one in Asia and elsewhere.

Trump’s election on an interest-based mandate to put America first changes its role from a hegemonic provider of global public goods and rules from which it benefits disproportionately to a struggle for comparative advantage, in a shift to multipolarity.

Delattre went on to say, “we need more than ever an America that stays committed to world affairs”, because a lasting US withdrawal “could give rise to the return of old spheres of influence whose dire consequences we are already familiar with”.

That fear of instability refers back to previous periods of multipolarity in world politics, particularly in late-19th- and early-20th-century Europe. The geopolitics of multipolarity then involved competing empires whose conflicts led to world wars.

This terminology is drawn mostly from the realist tradition of strategic and security analysis who say such periods of power transition between declining dominant state powers and emerging ones (such as Britain and Germany then and the US and China now) are usually unstable and dangerous.

It is arguably a mistake to extrapolate that European or US-centric fear to international politics now, in a different kind of world order. Multipolarity is used in different ways by Chinese, Russian or French commentators and analysts to depict a more balanced and fair distribution of power and influence between states or regions than applied during the period of US hyperpower.

Thus Chinese prime minister Li Keqiang told a meeting of the EU-China business summit last week: “My visit to Europe is aimed at building consensus, increasing mutual trust and enhancing co-operation between China and Europe to counter international uncertainties with a stable China-EU relationship and our consistent commitment to multilateralism.

"A united, stable, prosperous and open Europe and a strong euro serve the fundamental interests of all European peoples and contribute to world multipolarity, economic globalisation and diversity of civilisations.”

Multipolarity is also a leitmotif of Russian geopolitical values, while the French Gaullist tradition of asserting it against the US is being resurrected in Emmanuel Macron’s encounters with Trump. The flurry of meetings involving German, French, EU, Chinese and Indian leaders last week saw increasing reference to a multipolar turn in political discourse, telling a significant story about shifting allegiances.

A similar reconfiguring is taking place in east and southeast Asia as states there weigh up how they should relate to China and the US after Trump dumped the Trans-Pacific Partnership trade deal. Most are gravitating in China’s direction, or insisting it is not a zero-sum game.

A key issue is whether multipolarity as a way to understand and practice global power relations can be combined with greater regional integration and continuing multilateralism. Regional integration refers to the sharing of sovereignty among neighbouring powers and multilateralism to how they forge alliances for common goals at regional and global levels. In each case smaller states such as Ireland hope to enhance their influence and modify the power of larger ones.

Both values are central for the EU. Can it become more coherent as a foreign policy actor as the US disengages and how can it ensure the multilateralism it supports internally and externally is effective? Li Kequing’s reference to multilateralism highlights China’s emergence as a champion of a more balanced globalisation, again in contrast to Trump’s policies.

But China’s approach is resolutely sovereigntist in regional terms, echoing its ancient tributary system in Asia. That approach too may have to change in coming years if it is to develop good relations with its large and smaller neighbours.

1 Why you still can’t have a European holiday this summer. Or can you?
2 Donald Trump’s political success is based on racism
3 Oliver Callan: ‘I was a perfect candidate for exploitation’
4 David McWilliams: We won't have another 1980s-style recession
5 Fintan O’Toole: The violence of racism is deeply embedded in American society
Real news has value SUBSCRIBE