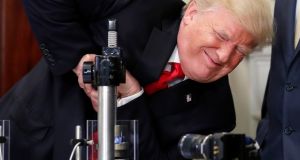 President Donald Trump attempts to crush a glass protective vial: as he settles into office, he has relatively few legislative wins to show. Photograph: Alex Brandon/AP

The timing of this week’s healthcare debacle could not have been worse for Donald Trump.

The US president marked his sixth month in office this week, a landmark that prompted renewed scrutiny of his achievements since becoming the 45th president of the United States.

An opinion poll earlier this week found that Trump has the lowest approval ratings of any president since 1945 at this point in their presidency. The Washington Post-ABC poll showed that Trump’s approval rating has fallen to 36 per cent, a six-point drop since April. Some 58 per cent of people said they disapproved of the US president, though significantly most of those who voted for Trump said they would do so again.

Trump, predictably, dismissed the findings of the poll as “fake news”, claiming that the same poll was wrong about the general election result. In fact, the Washington Post-ABC poll was one of the most accurate polls in the week preceding the election, its estimate for Clinton coming within the poll’s margin of error, and its Trump prediction a percentage point outside.

The reality for Trump as he settles into office is that he has relatively few legislative wins to show. Grand promises to revise the tax code and launch an infrastructure plan have made little headway. The wall with Mexico is still in planning stage while his immigration ban is stuck in the courts.

But it is the healthcare fiasco that threatens to undermine Trump and the Republican party’s credibility.

This week senate majority leader Mitch Mc Connell was forced to abandon the latest Republican plan to repeal and replace Obamacare after four senators withdrew their support. Immediately the blame game began as attention turned to the role of the White House in the debacle. Even before the latest crisis there had been mutterings in Congress that the president had been disengaged from the process, more obsessed with the ongoing Russian probe than the finer details of healthcare policy. Last weekend, in a last-ditch effort, the White House dispatched vice-president Mike Pence and health secretary Tom Price to the annual governors’ conference in Rhode Island to try and persuade wavering states. On Monday evening Trump, a man who likes to pride himself on his negotiation skills, hosted seven Republican senators for dinner at the White House. But those present were already supportive of the deal. Just as dinner was finishing, across the other side of town two other Republican senators announced their opposition to the plan, scuppering the proposal.

In contrast to Barack Obama who travelled to dozens of so-called “town-hall” meetings across the country from Montana to New Hampshire in 2009 drumming-up support for Obamacare, Trump has made no effort to sell the Republican healthcare plan.

Rather than show leadership on the issue, Trump in fact insisted he was “not going to own it” when it collapsed. Over the space of 24 hours he appeared to shift his stance on the next steps – first tweeting that Obamacare should be allowed fail before Republicans rewrite it, then embracing the idea of a “repeal-only” Bill, before finally calling for a full repeal-and-replace agreement by the end of August, a prospect that seems fanciful.

A belated effort to rally the party by hosting the 52 Republican senators for lunch at the White House on Wednesday was undercut by his veiled threat to his guests that he would support rival candidates in next year’s mid-term elections if they did not support the plan. “Look, he wants to remain a senator, doesn’t he?” he said of Nevada senator Dean Heller, prompting nervous laughter.

Trump’s apparent lack of interest in the healthcare plan was also reinforced by his tendency to distance himself from the party in his statements on the Bill, referring to “the Republicans” in the third-person as if he was a bystander rather than the head of the party.

But despite his impulse to brush away the healthcare issue – the White House made this week “Made in America week” when many believed they should have been focused on healthcare – health insurance could be the issue that causes Trump and Republican supporters to break ranks with their party.

After seven years of berating Obamacare, Republicans have been exposed as having no viable plan of their own. Unable to bridge the divisions within their own party, they are hopelessly divided between conservatives who believe that the plan still represents too much investment by the state, and more liberal senators who fear the devastating impact that repealing Obamacare will have on constituents.

As polls show that support for Obamacare, despite its flaws, is growing among the public, Republicans have been faced with the nightmarish political reality of trying to withdraw a benefit that millions of Americans, and Trump-voters, have got used to. Further, next year’s mid-term elections in November will take place just weeks after Americans will have been told of their premium costs for the year, potentially making healthcare a live political issue.

The tensions between Congress and the White House over healthcare could also be significant in another way.

While the Republican leadership has so far backed Trump, this week’s tensions could perhaps hint at the beginning of a Republican move against the president. Like it or not, Trump needs the support of his party as the Russian probe deepens. His attacks on attorney general Jeff Sessions and his deputy Rod Rosenstein in an interview with the New York Times this week, also shows a president who is prepared to lash out at those closest to him. As Congress prepares to hear testimony from his son Donald Trump jnr and former campaign manager Paul Manafort next week, the controversies surrounding Trump’s presidency show no signs of abating. The President needs all the friends he can get.