Prior to Berlin-Paris recovery deal, GCC may have set in motion EU crisis 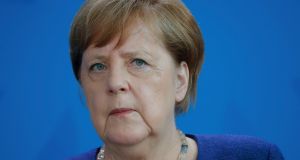 German chancellor Angela Merkel: her accord with Emmanuel Macron is a conscious end-run around the German Constitutional Court. Photograph: Odd Andersen

When Angela Merkel joined Emmanuel Macron on Monday to announce their support for a €500 billion pandemic recovery package, she was not only breaking German political taboos and economic orthodoxy, but making a conscious and welcome end-run around the German Constitutional Court (GCC).

A week beforehand the GCC had precipitated what threatens to be a major EU institutional and constitutional crisis by ruling that the European Central Bank, abetted by the Court of Justice of the European Union (CJEU), had exceeded its powers in engaging in “quantitative easing”.

This is a form of economic pump-priming involving the buying of bonds by the bank to inject liquidity into markets in danger of freezing up. The GCC struck a potentially crippling blow at what was, and remains, a cornerstone of the EU’s response to the financial crisis, an essential monetary instrument of the bank.

The court in Karlsruhe is responsible for overseeing constitutional propriety in Germany, and, in its view, in organisations like the EU to which Germany cedes sovereignty.

In repudiating an earlier CJEU ruling allowing QE, it broke a fundamental principle of EU law, the ultimate supremacy of the CJEU over national courts, a ruling that has delighted Poland and Hungary which are anxious to shake off CJEU oversight.

Crucially, the GCC claimed the ECB had failed to apply a proper test of “proportionality” to its decision to engage in QE and so was underestimating its economic effects.

Under treaty law, the ECB is allowed to engage in monetary activities but is not permitted directly to fund states’ spending. Now, in effect, the GCC was saying that because monetary measures like QE – and by the same logic, one Brussels lawyer put it to me, manipulating interest rates – have a substantial economic effect they may be scrutinised by the courts as a form of fiscal subsidy.

Critics of the ruling, and there are plenty in the commission, member states, and in Germany, say that the court is imposing an impossible test that, in effect, makes it a judge of monetary policy.

Karen Alter, a US political scientist, argues on a German legal blog that, “The true hubris of the GCC’s ECB decision ruling is the belief that the GCC can better determine monetary policy . . . The ECB, with the support of European leaders, made a reasonable decision for justifiable reasons.

The ECB and Bundesbank – not the GCC – have the political authority to make these decisions. Why the GCC thinks the legal strategy of ‘proportionality balancing’ will do better is baffling.”

How to get out of this mess is not clear

In attacking the CJEU, the GCC uses surprisingly strong language, denouncing its previous ruling as “incomprehensible” and “meaningless”. That is because it must demonstrate not only that the CJEU is wrong, but egregiously so. In that regard alone, has the GCC really met its own test?

The likelihood is that the commission will now agree to take to take infringement proceedings against Germany – problematic not least because the GCC is independent of government which cannot simply order it to recant.

And the issue arises of what is the actual infringement? Not the pronouncement of the decision, but the instruction to the Bundesbank not to participate in the next round of QE unless the proportionality test has been met within three months. So the clock is ticking on the ECB emergency coronavirus rescue package.

In an extraordinary political intervention, the GCC’s Peter M Huber, who drafted the constitutional opinion, has warned off the commission. He told the Frankfurter Allgemeine Zeitung that an infringement procedure “would trigger a significant escalation, potentially tipping Germany and other member states into a constitutional conflict that would be very difficult to resolve”.

How to get out of this mess is not clear, although this non-lawyer would suggest M’lud, that there is an onus on the Bundesbank legal advisers simply to explain to their client that as the CJEU primacy is not only an established fact of EU but German law, the bank should simply ignore the supreme court’s instructions – in effect saying to the GCC, as it tried to do to the CJEU, that it is acting ultra vires.

The EU may not be a state, but its uniqueness as a polity lies precisely in the fact that, unlike other multilateral international organisations like the World Trade Organisation, in sharing their sovereignty the member states have voluntarily endowed it with aspects of their statehood.

That includes a supranational authority that makes the CJEU a court of last resort, crucial to the coherence of and consistency in the application of law across what is in effect a common jurisdiction and market.

To unpick that fundamental reality is to undermine a key pillar of the EU.