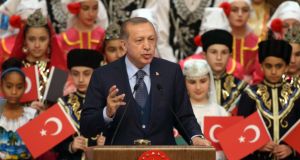 Turkish president Recep Tayyip Erdogan: “After the failed coup attempt last July, he started a large-scale purge of his “enemies”, arresting 45,000 people and firing or suspending 130,000. But he has 10 straight victories at the polls since 2002, and there is no doubting his popularity.” File photograph: Adem Altan/AFP/Getty Images

One of the first congratulatory calls Recep Erdogan received on Monday , after his successful constitutional crusade, was from Donald Trump, no less. It must have been gratifying – they are kindred souls, and The Trump, according to the White House, had nothing to say about the less-than-even playing field on which Erdogan ensured the campaign was fought. No words of reproach over the renewal of emergency powers. Nothing about arrests and sackings, the necessity for the rule of law . . .

Apprentice Trump, paying homage to the real, fully-formed strongman, autocrat, described variously by political writers now as a “neo-sultan” or a “neo-Ottoman” presiding over an “elected dictatorship”, “one more step”, as the FT and New York Times put it, “in the global march towards plebiscitary despotism” and “authoritarianisation”. Marching in step with Russia’s Putin, the Philippines’ Duterte, Venezuela’s Maduro and the late Chavez, Hungary’s Orban, and Zimbabwe’s Mugabe.

This modern autocrats’ club shares a contempt for political rights and minorities, and the freedom of the press, but also an important trait – majoritarian, populist mandates. Erdogan’s referendum is the latest example of what the New York Times calls “a puzzling phenomenon: democratically elected leaders who triumph in elections even as they move toward autocracy by undermining checks and balances and consolidating power”.

It would seem that the worldwide spread of democratic government, indeed, a measure of its robustness, is necessitating new-age dictators to legitimise their rule through democratic elections.

After the failed coup attempt in July, Erdogan started a large-scale purge of his “enemies”, arresting 45,000 people and firing or suspending 130,000. But he has 10 straight victories at the polls since 2002, and there is no doubting his popularity.

And his supporters see him as a liberating force. For a large, pious section of the population,Erdogan represents freedom from what they saw as a secularist oppression that characterised Turkey throughout most of the 20th century. He gradually, for example, relaxed headscarf restrictions, allowing women in headscarves to enter campuses from 2008, work in the civil service from 2013 and serve in the military .

Until Turkey’s economy began to falter , Erdogan had also brought significant material gain to much of the country. In his early years in power he beefed up the infrastructure, building roads, bridges and hospitals.

His nationalism, Islamism and hankering after a revival of his country’s Ottoman greatness finds a strong echo in conservative rural Turkey. His attacks on Western leaders, and on what many see as their two-faced attitude to EU accession, plays well.

Erdogan’s referendum represented more than a power grab by him, although it was undoubtedly that. It expressed an important cultural shift and alignment away from the values of the Turkish Republic – secularism and a European orientation – a realisation also of a major U-turn in its leader’s vision.

For Necmettin Erbakan, who led the Islamist movement from the late 1960s to the emergence of the Justice and Development Party (AKP) in August 2001, the republic represented cultural abnegation and repressive secularism in service of what he believed was Ataturk’s misguided vision of a more Western Turkey. He saw Turkey’s natural place not at Nato’s HQ in Brussels but as a leader of the Muslim world – its partners, Pakistan, Malaysia, Egypt, Iran, and Indonesia.

But Erdogan’s own remorseless political rise after he founded the AKP and broke with Erbakan came with a profound repositioning. He and his allies rejected the old anti-Western rhetoric and sought to position their party as a moderate, secularist, Turkish-Islamic model of European Christian democracy. EU accession was their goal, they said, and the process would help modernise Turkey, enshrining the human rights they were denied. Evidence, they assured Europe, of the potential for reconciling democratic values and Islam, a model for a new Islamic order.

In power, Erdogan has gradually reverted explicitly to Erbakan’s vision of Turkey’s place and to a creeping Islamicisation of the state. His commitment to EU accession is increasingly just rhetorical, a means of exposing European leaders’ “double standards”.

For its part, the EU, desperate to maintain the agreement with Turkey on migrants from Syria, has a difficult balancing act to play. Increasingly, particularly after this referendum, which the union denounced as a dangerous move towards one-man rule, there are explicit calls for a formal end to the accession negotiations. But even if the talks all but grind to a halt, others argue, they remain an important lever and benchmark in the dynamic of Turkish modernisation.

1 In six months we will be in the grip of a 1980s-style recession
2 Sweden should have done more to combat coronavirus, health chief says
3 With Lincoln looking on, the crowd dropped to their knees as 7pm approached
4 Luke ‘Ming’ Flanagan bares his bottom half to European Parliament
5 Michael McDowell: Black Americans fear the future and so should we
Real news has value SUBSCRIBE