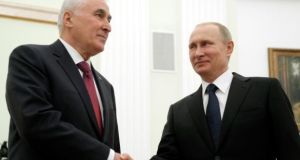 President Vladimir Putin with Leonid Tibilov, the president of the Georgian breakaway region of South Ossetia. Putin regards South Ossetians as Russians that history has wrongfully parted from their homeland. Photograph: Maxim Shipenkov/Reuters

There is of course a subtext. The Alans, a nomadic tribe of Central Asian origin who conquered a wide swathe of plains in southern and western Europe in late antiquity and the early Middle Ages, are the ancestors of modern day Ossetians.

Above all, they are not Georgians, to whom South Ossetia was attached when the old Soviet Union broke apart, and the referendum is quite simply, in the name of the revival of the “Great Alania”, an implicit, unexpressed, invitation by Tibilov to President Vladimir Putin permanently to annex South Ossetia, just as he annexed Ukraine’s Crimea.

Unsurprisingly, the Georgians are furious, and nervous. Putin has form – and Georgia has fought two wars with Russia over the disputed territory, and that of the other enclave under Russian control, Abkhazia, since 1991.

Tbilisi does not recognise either Tibilov’s government or the enclave’s declaration of statehood, only accepted by three other states, and points to the referendum’s disenfranchising of the majority of the enclave’s erstwhile citizens, now refugees in both Georgia and North Ossetia.

Meanwhile, alarmed but unwilling – unable – to do anything, the European Union watches on. The dispute and union’s impotence epitomise its difficult relationship with Russia and the former Soviet states which the latter still regards as its “sphere of influence”, Russian minorities in most of them still under Moscow’s protective wing. The EU’s response, notably in Ukraine, has been fumbling and uncertain.

Of the six former Soviet states which participate in the EU’s “Eastern Partnership” – Armenia, Azerbaijan, Belarus, Georgia, Moldova and Ukraine – only Belarus has made it through the last quarter century without being involved in armed conflict internally, while the latter joins Azerbaijan as the most politically stable of the regimes, albeit the most authoritarian.

Russian troops occupy parts of Georgia, Moldova and Ukraine, all home to secessionist entities that aspire to their own statehood, and they are stationed with the approval of the host states in Armenia and Belarus. It has also used economic sanctions to arm-twist Georgia, Moldova, and Ukraine, and has annexed the latter’s Crimean region.

Writing of the Cold War veteran US diplomat George Kennan in 1949 described a political reality about Russian attitudes that still prevails despite the collapse of the Soviet Union: “The jealous eye of the Kremlin can distinguish in the end only vassals and enemies, and the neighbours of Russia, if they do not wish to be one, must reconcile themselves to being the other.”

And Russia’s “hands-off” attitude is largely implicitly accepted by western policymakers, notwithstanding the occasional rhetorical blast at Moscow – the EU is unwilling to take on the burden of promising accession, while Nato half-promises membership security blanket that Russia knows it will not deliver.

“The West’s policy towards eastern Europe so far has been one of relatively benign indecision,” Ian Bond* writes in a report for the Centre for European Reform think tank. “When Nato leaders continue to proclaim that the alliance has an open door, or when the EU says ambiguously that its association agreement with Ukraine ‘does not constitute the final goal in EU-Ukraine co-operation’, they raise hopes in eastern Europe and fears in the Kremlin that are divorced from reality.”

Russia knows it can continue its bullying. Putin regards South Ossetians as Russians that, like Crimeans, history has wrongfully parted from their homeland.

Magdalena Grono, of the International Crisis Group, warns of a new instability since the election of Trump. His hostility to Nato and apparent sympathy with strongman Putin have caused considerable alarm in the region.

“If the Ukrainian and Georgian governments feel that they cannot genuinely trust the West to protect them against Russia,” she writes, “they are likely to become increasingly nervous and unpredictable. They may also be less willing to invest in reconciliation with those living in breakaway areas, whom they too often see as willing Kremlin proxies.”

If the United States, for example, were to lift sanctions on Moscow relating to its actions since 2014 in Crimea and eastern Ukraine, Kiev sources have informally told her that Ukraine’s only choice may be to escalate its war against rebels.

These are dangerous times.