Breda O'Brien: Why the sexual future belongs to men like Trump 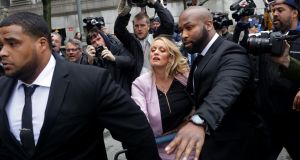 There was a telling little cultural moment last week. Stormy Daniels is famous enough to ensure that her tweets about her lost luggage make not just Irish but international headlines.

It all became a huge controversy when she said that Michael Cohen, Trump’s attorney, had paid her $130,000 as part of a non-disclosure agreement.

Hof is now famous for winning an election this year to a Nevada state legislative district despite the fact that he died during the campaign. He claimed to be a Trump-style candidate and was also a reality TV star. (The show was filmed in one of his brothels.)

It is quite astonishing that the other reality TV star, Trump, continues to occupy the White House despite allegations of sexual impropriety involving many different women. This is a man who apparently believes that wealth and power give men some kind of feudal right to grope women.

Feudal is perhaps a good approximation of what Trump believes the US presidency to be – a clear power structure with the monarch at the top, virtually unquestionable by minions who are constantly in danger of being executed (metaphorically) for failure to carry out the king’s demands.

Daniels has always been absolutely clear that the sex with Trump was consensual. She was not physically attracted to him, was concerned enough about his wife to inquire about her, but also wanted a part on his hit reality TV show, The Apprentice.

But at the same perhaps a scenario very recognisable by many women, who are expected to be sexually enthusiastic at all times but often experience casual sex that has passed the consent test but is still seedy and unsatisfying.

The desensitisation may now have further unintended consequences. An Atlantic magazine article this month is just another in a series of explorations of why young people are having less sex, living together less and marrying less successfully. We now have a generation with many lonely, anxious and increasingly isolated young people.

Kate Julian, the Atlantic article writer, says that the Japanese preference for solitary sexual activity used to be seen as weird by other countries. Now, it is a growing phenomenon right across the West. In the US, she says, there is not so much a hook-up culture as a lack-of-relationship culture.

De-coupling sex from relationships has resulted neither in sexual nor relationship nirvana.

The kind of coarsening of our culture that Trump represents is not an accident but a logical result of deciding that sex is primarily a recreational activity with no intrinsic greater significance.

Until our societies have the courage to consciously re-couple love and sex, we will continue to have a generation who find it more and more difficult to establish fulfilling, long-term intimate relationships. The way we are going now, the future belongs to men such as Hof and Trump.