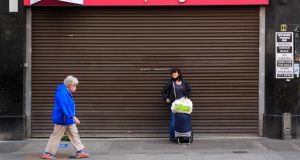 After a lost summer, unavoidable impositions on our freedoms have led to an inevitable backlash. The plethora of outraged conspiracy theorists taking to the streets of Dublin and other European capitals propagating all manner of harmful nonsense are one such element.

Alongside this extreme fringe are an emerging band of contrarian “lockdown sceptics” like British commentator Toby Young, intent on downplaying the situation.

We need to banish the popular misconception that the problem doesn’t really exist. In particular the assertion that low virus prevalence implies the vast majority of positive tests are really false positives.

Such arguments, draped in the garb of rigorous-seeming analysis, are emphatically embraced across social media as proof positive that rising rates of Covid are illusory.

They may seem superficially believable – false positive results are an inescapable reality of all medical testing – but this is wishful thinking, pivoting on deeply muddled understanding.

To appreciate why, consider two concepts integral to testing: sensitivity and specificity.

Sensitivity refers to how frequently a test correctly identifies a positive result. Conversely, specificity is a measure of whether a negative result is correctly labelled. International experience suggests that PCR-testing for Covid-19 has a sensitivity of 98 per cent, with specificity upwards of 99.99 per cent.

This highlights a counter-intuitive reality – the exact same testing protocol in different populations yields different false positive rates. Test accuracy is intrinsically dependent on the prevalence of a disease in that population. As incidence falls, so too does the reliability of a positive result – a consequence of Bayes’ theorem, the mathematical framework for conditional probability.

But this still doesn’t support the “sceptic” position. When analysed properly, the false positive issue becomes vanishingly small. There is simply no plausible mechanism to explain away an exponential rise in positive results as a statistical artefact.

The position of “sceptics” is inherently specious, rendering “denialist” a more apt moniker. That hospital admissions and patients in intensive care numbers have also crept up is indicative of a very real increase.

This seems grim, a return to the despair of late spring – an impression re-enforced by ill-considered headlines like “Highest daily cases since May”.

Deflating as these factoids seem, they are misleading; we can actually draw some comfort from the data. The crucial thing to note is that we are currently performing over three times the number of weekly tests we were in May. Our testing net and case definition has also markedly widened. When we once only tested the critically ill, we are now capturing more asymptomatic and mild cases. This renders direct comparison between numbers in April and May and now hopelessly misguided, as prevalence earlier in the year was likely significantly higher.

There are other pertinent differences in our current situation too. In a laudable move, daily Covid statistics are available on data.gov.ie. Analysis of this data shows that the 15-24 age category accounts for the lion’s share of new cases, rising progressively since late June. This isn’t surprising – one’s probability of contracting Covid is a function of the number of contact events, and younger groups tend to see far more people more frequently than older people. They are also much less likely to suffer obvious ill-effects from the virus. The decrease in infected older people also suggests they have been successful in protecting themselves. Yet even if the virus is largely existent as an asymptomatic reservoir in young people, it can still spread into vulnerable populations. Consequently, detection and isolation of even asymptomatic cases benefit everyone.

Detection and isolation of even asymptomatic cases benefit everyone

Rather than despair or sink into nihilistic apathy, we can draw strength from the fact that we can and will improve things. Risk is not all or nothing – if we have more exposures in one context, we can limit them in another. This necessitates trade-offs for the time being; if children are meeting in schools, parents can for example mitigate unavoidable risk by limiting socialisation outside of those hours. All of us for now must be selective about our exposures, fatigued as we are.

For now, we cannot forget the primary purpose of temporary restrictions is to ensure intensive care units do not become overwhelmed, so that the deadly scenes witnessed in Italy and New York do not play out here. This, thankfully, remains well within our power.

Dr David Robert Grimes is a physicist, cancer researcher and author of The Irrational Ape: Why Flawed Logic Puts Us All at Risk and How Critical Thinking Can Save the World