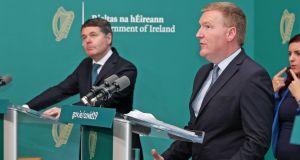 The world has changed – utterly. But the debate on the economy goes around in the same old circles. We say we will protect those worst hit by the pandemic, and work to rebuild the economy. But this requires new ways to allocate and raise resources. The great cry – we can borrow the money – may get us through this year and next. But it is not a long-term solution.

The jobs of hundreds of thousands of the youngest and lowest-paid in the economy are now on the line. This is the group we need to focus on, together with the other individuals and businesses hit hardest by the pandemic. If we don’t act quickly, tens of thousands will fall into long-term unemployment. This is an emergency – and it will require an emergency response. This Government and its predecessor got the first phase right in terms of supports – ramping up wage and income subsidies – but the next phase will be even more challenging.

Yet public debate has still to really grasp the scale of this. From next week a pay increase will go through on the nod for those at the other end of the spectrum: secure, pensionable public servants. This is part of an outstanding pay agreement, for sure, but terms and conditions for many in the private sector are being torn up and unemployment is shooting higher.

No one would argue that the frontline public sector workers – for instance, nurses, ambulance and fire crews and hospital porters and cleaning staff – should not get an increase. But this increase, at an annual cost of €264 million, is going to 340,000 public servants across the economy, most in secure jobs and many with attractive pensions entitlements; judges, TDs and others of the highest paid will also cash in. Many public sector pensioners will automatically share in the increase. The cost to the exchequer of public sector pensions is due to rise from €3.4 billion in 2017 to €5.3 billion by 2025.

At a time when the pandemic unemployment payment is being cut and parts of the private sector shut due to new restrictions, the timing could hardly be worse. You can understand, perhaps, that the Government didn’t want a fight on this – but it simply cannot sign up to a new public pay deal with further rises next year and beyond. It needs to pause and see what happens. Public pay and pensions policy needs to be reset for a Covid-19 reality.

The wider issues of pensions also needs to be tackled, particularly in the context of equity between generations. The Government has decided to defer a decision on the proposed rise in the pension age and ask a commission to consider it. If the plan to gradually increase the pension age is abandoned, it will cost the exchequer an additional €400 million a year between 2022 and 2025. The cumulative cost by 2025 would be €1.9 billion. Would this cash not be better spent on a massive upscaling of job supports, training, education and placements for young people, and an improvement in basic digital skills, all areas where the National Competitiveness Council (NCC) highlighted this week that urgent action was needed?

The local property tax, with revaluations delayed by another year, is sliding into irrelevance

Of course, the other side of the equation will have to be addressed too: taxes. There is no case for a general rise in taxes now, in the teeth of the recession. We can legitimately borrow to pay the once-off costs of bailing out the economy and trying to limit the immediate damage. Though there is a limit. But we can’t borrow to pay the longer-term, ongoing costs we will face in the years ahead to support the economy, boost the health services and pay for the many commitments in the programme for government. Pretending we can do this without increasing taxes in the years ahead is dishonest.

And yet, here too the debate is stuck. This week in Dublin City Council, councillors of Fianna Fáil, Fine Gael, Sinn Féin and Independents voted to maintain a 15 per cent cut in the local property tax, despite a big Covid-19 hole in the council’s finances. Now if you wanted to get better-off and richer Dubliners to pay a bit more, this was the way. Instead, we will now have either slashed service levels or a bigger subsidy from the central pot of all taxpayers. But, remarkably, even the left in Ireland opposes a tax which is the clearest and most efficient way to tax the predominant source of wealth in the economy and one which clearly hits the wealthier a lot more.

Meanwhile, the local property tax, with revaluations delayed by another year, is sliding into irrelevance as a source of revenue – and those who bought new houses since 2013 don’t even have to pay.

Higher taxes are on the way, even if it is not next year. I suspect businesses will soon be asked to pay more via employers’ PRSI and quite possibly employees and the self-employed too, to help pay for ongoing social benefits in areas such as sick pay, wage supports and so on.

We need to have a proper debate on where other resources can be raised too, and a commission on tax is promised to examine this. It shouldn’t take an age to report – most of this is not complicated and the options are clear enough.

Perhaps the budget, presented by Minister for Finance Pascal Donohoe and Minister for Public Expenditure Michael McGrath can start to spell some of this out and look beyond the immediate emergency, difficult as that is. They have a really difficult job. The world has changed – it is time to start thinking about what we do next and, crucially, how to support a younger generation whose jobs and prospects have been upended.

Are we really serious about making the decision to do this?