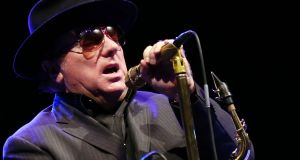 Van Morrison performs on the stage of the Olympia concert hall in Paris, on September 14, 2012. (Photo by THOMAS SAMSON/AFP via Getty Images)

Whenever Irish music journalists meet, talk inevitably turns to encounters with Van Morrison. From the hostile, suspicious glare that penetrates your very soul on the introductory handshake to the terrifyingly awkward ten minute silences that punctuate the interview to his constant assertion of “That’s the stupidest question I’ve ever been asked” - which seems to alternate with a brusque and bored “No” as his reply to the even the most informed and detailed of questions.

Tales are exchanged of the young, inexperienced music writer who boasted loudly that he had secured a Van Morrision interview and that his first question to the great man to “lighten the mood” (oh dear God) was going to be: “Van, your song “Why Do I Always Have To Explain?” - what’s that all about?”. Glasses are raised in his memory.

But a reverential fascination with the man and his music persists. This is an Irish musician who sits pretty alongside Joyce, Beckett and Yeats at the top table of Irish artistic achievement. His body of work contains quite simply some of the best popular music ever released. Astral Weeks, Veedon Fleece, Moondance - you can but swoon at such staggering genius.

The extravagant amount of outrage expressed over the weekend that Morrison will shortly release three new songs which he has written to protest against the safety measures being taken to stop the spread of Covid-19 was commensurate with his exalted status.

While others from the popular music world - such as Noel Gallagher (ex-Oasis) and Ian Brown (ex-Stone Roses) have also signified their disapproval with the safety measures, there was the inescapable feeling that both Gallagher and Brown were daft to begin with.

But with Van, it was a dejected and defeated case of “Say it ain’t so”. Uniquely among prominent musicians he has spent the last six decades of his recording career as a great and noble “truth seeker”. While others were just retreading Tin Pan Alley lyrical clichés, Van was asking the Big Questions.

His work explored mystic religions, he sang about Tibetan Zen and Celtic Mysticism. On his Inarticulate Speech of the Heart album he flirted with Scientology and thanked the movement’s founder, L. Ron Hubbard in the sleeve notes. He sang about the 11th Century Persian mystic Omar Khayyam and the great Lebanese philosopher Kahlil Gibran. While others were still struggling with “Sha La La”, Van was telling us about the esoteric order of Rosicrucianism.

That he has always been on a quest for True Enlightenment makes the lyrics he is writing now so profoundly perplexing. On his new song, No More Lockdown, to be released this week, he sings “No more lockdown, no more government outreach, no more fascist bullies disturbing our peace” before he goes on to reference “Imperial College scientists making up crooked facts”.

That he now finds himself in bed-wetter Conspiracy Theory terrain is far from a simple twist of fate. But then the Belfast poet, Tom Paulin, once presciently wrote “Morrison comes not out of traditional Protestantism, but evangelical Protestantism. That’s the foundation of his imagination - he is testifying”.

And there is his wilfully capricious nature. During the 1990s, the man who had dived deep into the mystic, who had undergone Gestalt therapy, who had been diagnosed by a Rosicrucian master as having an “Angelic Knot” in his throat, suddenly became a fixture in Dublin’s Lillie’s Bordello nightclub and a staple of the gossip columns.

That Morrison is now testifying that we need to “stand up, speak up and fight the pseudo-science” about Covid-19 (as he said last week) may just be - to be overly charitable - an inarticulate expression of his life-long contrariness. Or maybe like WB Yeats (whom he is frequently compared to) he has taken a turn to the dark side late in his career.

Either way it all only serves to lead us back to the opening line of one of his greatest songs.

With a slight paraphrase: Rave on, Van Morrison, rave on thy holy fool.

1 Woman stranded in Ireland due to pandemic has ‘miracle baby’
2 Matthew McConaughey: ‘I wouldn’t give back one ass-whupping for the values that are ingrained in me’
3 Seán O’Brien: Anger over my parents’ break-up never left me
4 Covid-19: Critical cases from NI could put pressure on services in Republic
5 Behaviour is best Covid-19 vaccine available
Real news has value SUBSCRIBE