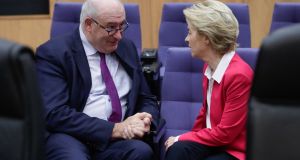 There is an issue of political accountability at the heart of every government’s response to Covid-19. On the one hand, a government would be foolish not to treat scientific and medical advice as the principal input into its policy making. On the other hand, a government cannot hide behind that advice.

Taking account of the expert input, it must make its own judgments, especially if the advice is conflicting or tentative. It must carefully balance the strictly medical analysis with economic, social and educational considerations. It must also take account of public opinion and public resilience. In the end, the Irish Government, like every democratic government, must accept political responsibility for its Covid-19 policy.

In this context, the Government’s decision to establish a new group, chaired by Government Secretary General Martin Fraser, to assess the advice of the National Public Health Emergency Team and to place it in context prior to Government consideration, is an interesting one.

The new committee established by the Government seems to be a well-judged initiative, although its effectiveness naturally remains to be confirmed in practice

Political accountability in Ireland is alive and doing ok. In the short lifetime of this Government, we have seen two ministers for agriculture resign as well as the wider political casualties of Golfgate. We have also seen Sinn Féin’s Martina Anderson apologise unreservedly for her offensive tweet about people injured in the Northern Ireland conflict, as well as Michelle O’Neill, Northern Ireland’s deputy first minister, expressing regret for the role of the Bobby Storey funeral in undermining trust in the Northern Ireland Covid rules.

People may disagree, in each individual case, about whether the relationship between the offence and the “punishment” is proportionate. However, resignation, apology and regret all reflect some form of political accountability.

One of the core principles of the committee will be to ensure that the scientific advice continues to be presented frankly to Government. No sexing-up or dilution of the dossier

The contrast with Boris Johnson’s Britain could not be more stark or more striking. Members of the British government, contrary to long-standing tradition, are today deemed immune from political accountability. The education secretary, Gavin Williamson, for example, who presided over the A-levels results shambles, and Attorney General Suella Braverman, who acquiesced in the government’s egregious decision to break international law, remain in place with apparently untroubled consciences. Meanwhile, the heads of their senior civil servants have rolled and the Jacobin tumbril gathers pace. As a matter of policy, even simple apologies are now banned by Downing Street. Dominic Cummings’ unapologetic, barefaced, implausible account of his Covid meanderings was the most egregious example.

The new committee established by the Government seems to be a well-judged initiative, although its effectiveness naturally remains to be confirmed in practice. It is sensible that there should be a sorting house at the intersection between the pure scientific advice and the Government’s deliberations. Otherwise the risk is that the necessary calibration of scientific and wider political considerations will be somewhat random and disjointed; certainly less than optimal. Indeed, the establishment of the committee presumably reflects a sense at Government level of the need for some improvement in its decision-making processes on Covid.

One of the core principles of the committee will be to ensure that the scientific advice continues to be presented frankly to Government. No sexing-up or dilution of the dossier, as it were. Where that advice is complex or contradictory, those nuances will have to be set out with equal frankness.

At the same time, the committee will be able to bring together, in a coherent and comprehensive way, all the other diverse considerations that must be factored in by the Government: from economic impacts to protecting the most vulnerable; from budgetary challenges to mental health issues; from the enforcement of Covid regulations to the impact of travel restrictions. It will also be able to draw together and keep up-to-date a narrative on both the best practices and worst experiences in other countries. Importantly, it can outline options and their implications. All of this will play precisely to the role and strengths of the Irish public service.

Some might fear that the committee could serve to deflect blame from the Government for any decisions to depart from the formal medical advice. I do not share that fear for four reasons.

First, in Ireland it is well understood by civil servants, ministers and the general public that civil servants do not establish public policy, but rather assist ministers to take decisions by providing impartial advice without fear or favour.

Second, there is no evidence of Irish ministers planning to follow their British opposite numbers in shirking political responsibility while hanging their civil servants out to dry.

Third, we do not, like our neighbours, suffer from a dominant tabloid culture that dilutes, and frequently cancels out, the role of the good journalism in pursuing politicians, occasionally perhaps even too vigorously, to ensure accountability.

Finally, in Ireland the relationship between civil servants and politicians from across the spectrum remains broadly one of trust rather than recrimination.

Bobby McDonagh is a former ambassador to London, the EU and Rome