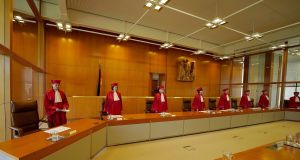 A judgment by the German federal constitutional court on May 5th has caused serious concern because it challenges the authority of the European Court of Justice (ECJ) in Luxembourg as final interpreter of European Union law.

The question for the German court was whether or not the European Central Bank had exceeded its authority in taking decisions since 2015 which had provided a financial stimulus to the euro zone. In accordance with EU law it asked the ECJ for a “preliminary ruling”.

The ECJ decided in December 2018 that the ECB had not.

This, one would have thought, had settled the matter. But the German court did not agree. In its subsequent judgment it accepted that although it was bound “in principle” by the ECJ ruling, “this no longer applies where the interpretation of the treaties is not comprehensible and must thus be considered arbitrary from an objective perspective”.

It concluded not only the ECB but even the ECJ in its ruling were acting ultra vires, which is to say that each had exceeded its authority. It ordered that, after a three-month period for consultations, the Bundesbank, the German central bank, must no longer implement the ECB decisions unless the ECB governing council took a new decision which conformed to standards set out in the judgment.

This German court decision raises a fundamental question about the kind of structure successive EU treaties have created in Europe since the 1950s.

During the 20th century the sovereign state became the universal model of social-political organisation around the world. The EU is plainly not such a state, federal or otherwise; nor does it wish to become one. Indeed, in a 2014 opinion the ECJ said “the EU is, under international law, precluded by its very nature from being considered a state”. So is it then just one interstate organisation among others where member states co-operate on particular issues while retaining their sovereignty?

Or have we, as I would argue, created in Europe over the past 62 years something new and quite without precedent in international life – a union of states and of peoples based on common values such as democracy, the rule of law and human rights?

The case for seeing the EU as unique is a strong one.

– It has institutions of a supranational character, on which the 27 member states have conferred exclusive competence to legislate and adopt legally binding acts in specified areas. Most such decisions are taken by qualified majority. No other organisation of states has anything even remotely like this.

– Many of the resulting laws have ‘direct effect’ – in that they bind member states and citizens directly with no need for implementing legislation at national level.

– There is now a dense network of EU law which, as the European court has held consistently since the 1960s constitutes ‘a new legal order . . . the subjects of which comprise not only member states but also their nationals’.

– EU law has primacy over national law but it is not a separate system – it is interpreted and applied in the first instance by national courts of the member states which, when necessary, seek ‘preliminary rulings’ from the European court.

– It has an independent court of justice which ensures the uniform application of EU law throughout the union and which may impose binding decisions and penalties on member states.”

In view of all this it would be wrong to describe the ECJ as simply a “treaty tribunal” with limited functions.

To be fair, the German court did not do so. On the contrary, it said explicitly it is for the ECJ to interpret the treaties and it should not substitute its own interpretation for that of the European court. Moreover, article 23 of the German constitution – the Basic Law of 1949 of which it is “guardian” – obliges the government, “with a view to establishing a united Europe” to work for “the development of a European Union committed to democratic, social and federal principles, subsidiarity, the rule of law and a level of basic rights substantially comparable to the Basic Law”.

Why then has it challenged the judgment of the ECJ?

One reason is its assertion that that particular judgment was “manifestly” and “objectively arbitrary”. This is hardly convincing.

More important is its view that the German Basic Law, though it allows a transfer of sovereignty by law, “prohibits conferring upon the European Union the competence to decide its own competences”.

More fundamental still is what it said in a 2009 judgment about the Lisbon Treaty. Notwithstanding the “constitutional mandate to realise a united Europe” in the Basic Law, the EU is still “an association of sovereign states . . . whose fundamental order . . . is subject to the disposal of the member states alone”. Again its current judgment says “the EU has not evolved into a federal state”.

This binary approach does not allow for the EU as a wholly new kind of structure in international life.

Even so, it is a fact that in the EU as it stands there is already a substantial pooling of sovereignty: the member states have conferred exclusive competence on EU institutions to act for the union across a wide range of areas; and there is now a very substantial body of European law which binds member states and their citizens. Any legal system has to offer “legal certainty”.

So it needs a court exercising final authority in interpreting the laws to ensure uniformity and coherence. The German court accepts that this is role of the ECJ but it wants to retain an oversight role for itself in exceptional cases.

Would it then be ready to concede a similar role to a national court in each of the other 26 member states? An eminent judicial body recently said what would happen: “If any member state could readily invoke the authority to decide, through its own courts, on the validity of EU acts, this could undermine the precedence of application accorded to EU law and jeopardise its uniform application.”

The court ought to give more weight to these words; they come from paragraph 112 of its own judgment of May 5th.

1 Taoiseach urges British people not to holiday in Ireland at present
2 Dublin has crowd-free weekend as pubs long for July 20th restart
3 Anne Enright: ‘Nuala O’Faolain was an impossible person, to whom we owe so much’
4 Keith Duggan: Bubba Wallace tweet shows just how troubled Donald Trump’s mind is
5 Off the charts: why this paint colour is Instagram's favourite
Real news has value SUBSCRIBE