Ireland should be slow to condemn Karlsruhe 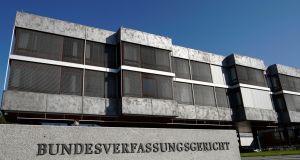 The ruling of the German federal constitutional court at Karlsruhe in relation to the ECB’s purchase of government bonds caused outrage in the EU’s establishment. Photograph: Ronald Wittek/EPA

Over the last few weeks, a furore has been whipped up about the decision of the German federal constitutional court at Karlsruhe, the Bundesverfassungsgericht (BVerfG for short), in relation to the European Central Bank’s purchase of government bonds.

The decision called for this power – and in effect the ECB support to euro-area members in the current crisis – to be shown to be proportionate to the ECB’s limited monetary policy objectives. If it were not so established, the BVerfG implied that implementing the support package might not be lawful under German constitutional law.

The Karlsruhe position is very simple. The EU is not a state

But the issue is not new. And the German position remains quite clear.

The BVerfG has a very clear view of its own jurisdiction to determine whether the federal republic is or is not constitutionally bound by CJEU rulings on matters of EU law as they affect member states.

What is that position? The Karlsruhe position is very simple. The EU is not a state. The CJEU is not the supreme court of a sovereign state.

Viewed in that way and in German constitutional terms, the CJEU is, in truth, a treaty tribunal not competent to autonomously determine its own jurisdiction or competence in a way binding on parties to those treaties.

In German jurisprudence, the exclusive, autonomous power of any court to decide the extent of its own jurisdiction is described as kompetenz-kompetenz. This, they say, is not an attribute of the CJEU.

The ultimate decision as to what the EU treaties mean for Germany (and, indeed, for any member state) and the extent of the obligation to be bound by such a decision is a matter to be determined individually by the institutions of that state and not, in the ultimate, a matter solely for the institutions established by those treaties.

This should come as a surprise to nobody. When the Lisbon treaty was in the course of adoption in June 2009, the BverfG adjudicated on whether that treaty was compatible with German law.

The idea of 'limitless primacy' for EU law implies the existence of an EU state, an idea not found in the EU treaties

It decided that the Lisbon treaty was compatible with the federal republic’s constitution – but only on the reasoning that the EU was not becoming a sovereign federal state, that the CJEU would not enjoy kompetenz-kompetenz, that Germany retained the legal power to determine in the ultimate the extent of its obligations under the treaties, that the member states were still the masters of the EU treaties and that the EU did not and would not have ultimate autonomy in deciding such matters.

Lest anyone think that this just was an example of German big-state exceptionalism, it is worth noting that the Czech constitutional court also came to a similar conclusion on similar reasoning at the same time.

The senior judge at Karlsruhe, Peter Huber, evidently stung by hysterical criticism coming from the European Commission and federalist lawyers, told the London Times last week that the idea of “limitless primacy” for EU law implies the existence of an EU state, an idea not found in the EU treaties and not accepted by any member state.

He tellingly pointed out that the CJEU in Luxembourg, whenever the issue of EU competences under the treaties has arisen before it, has only decided against EU competence on three occasions in tens of thousands of cases since 1951.

Nowhere is its insatiable ambition for aggrandisement more on display than in its obstruction of the provisions of the Lisbon treaty that explicitly mandate the EU to accede to the European Convention on Human Rights (ECHR) overseen by the Council of Europe – a separate organisation to the EU.

An agreement for the accession of the EU to the ECHR was rejected by the CJEU in its infamous Opinion 2/13 that interpreted EU treaties so as to effectively frustrate the clear obligation on the EU to accede to the ECHR.

A clear treaty mandate to accede to the ECHR was effectively interpreted out of existence.

Ireland should be slow to condemn Karlsruhe; our own interests may lie in keeping a limited role for the CJEU as a treaty tribunal.