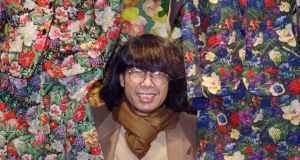 Japan’s most famous fashion designer, Kenzo Takada, at the end of his autumn-winter presentation of his 1992-93 ready-to-wear collection in Paris. Photograph: Pierre Guillaud/Getty Images

Kenzo Takada, who has died aged 81 after contracting Covid-19, was the first internationally successful Japanese designer and, for more than a decade after his Paris debut in 1970, a major influence on world taste in dress.

This was only fair, since his work synthesised traditional and genre clothes and ornaments from east and west, north and south, into a fashion without frontiers. He had been based in the French capital from 1964, and made it his home for the rest of his life.

His sophisticated aesthetics, especially in creating and collaging printed textiles, summarised centuries of global trade in cloth and apparel back and forth between cultures, yet felt as fresh and novel as the naive mural, inspired by the artist Henri Rousseau, that Takada painted on the walls of his first, tiny boutique in Galerie Vivienne. He called the shop, which opened in 1970, Jungle Jap. Unusually, he made his name there in the new ready-to-wear market before attempting couture.

Lacking financial backing to purchase fabrics on credit, Kenzo – as Takada was commonly known – bought cheap, often ethnic, prints in the Marché St Pierre for his first shop samples; when they sold out and he needed more supplies, friends in Japan loaned him money to import printed cottons.

He could not afford to pay for making up either, so he and his staff sewed the stock; its simple cuts were based on the rectangles of folkwear, which produced romantic, big-silhouetted garments, loose and easy to wear.

Jungle Jap was an immediate success, quickly earning an Elle magazine cover since, unlike other early French ready-to-wear names, it was about youthful fun rather than status. Kenzo showed his pret-a-porter in season – autumn clothes in September, while couture houses were parading clothes for the following spring – and his early shows were happy parties in the shop using friends from different ethnicities and backgrounds as models.

That continued when he moved to Passage Choiseul in the fashion district, still an outsider, a stranger to the system, yet attracting international attention and custom. (His label had been renamed Kenzo in 1971, after the US market objected to the term “Jap” as a racial slur: that was not Kenzo’s view.)

He reached Paris’s couture zone in 1976, opening a flagship store, Kenzo, on the Place des Victoires, and producing pretty, witty collections, in part as publicity for his company’s new boutiques, which began to spread around the world. With money behind them, his shows expanded from parties to performance art (memorably, Kenzo arriving by elephant under a circus big top), but they were never pretentious.

Takada had been born into a culture that took pleasure in textiles. In a photograph snapped soon after his birth, he peeks, wearing a frilly western baby bonnet, from traditional wrappings, held in the arms of a kimonoed nanny. The family lived in Himeji, where his father, Kenji Takada, owned and ran a teahouse, helped by his determined mother, Shizu. Kenzo was the third of their five sons and had two sisters, whose fashion magazines he later read.

The teahouse hosted geishas, for whom elaborate ensembles of dyed, stencilled, brocaded and embroidered silk were working clothes. As a boy, Kenzo liked to look through the drawers and boxes in the teahouse where these were kept, and watch the kimono merchants offering new wares.

Despite a disrupted education in the years after the second World War, Kenzo, at his parents’ insistence, began a degree in literature at Kobe University. However, as soon as the Bunka Fashion College in Tokyo announced it would accept male students, he dropped out of Kobe and successfully applied there.

After winning Japan’s Soen magazine fashion talent prize in 1960, he became a prolific designer of girls’ clothes for a Tokyo department store.

Luck brought him his future in 1964 when he was awarded compensation because the block of flats where he lived had to be demolished to make way for the Tokyo Olympics. A former teacher at Bunka had studied in Paris, and advised Kenzo to travel there. The money bought a berth on a slow steamboat, with stops from Hong Kong to Marseille (Kenzo recalled the traditional clothes people wore at each port), and also paid the rent of nine francs a night for a room in cold, dirty Paris.

What he had intended as a six-month stay stretched on and on as he sold sketch ideas to fashion houses and magazines, and photographs of Parisian street style back to Japan. He wangled his way in to couture showings, but their perfection seemed unachievably remote, and Kenzo decided to create fashion a more accessible way, hence his entry by pret-a-porter.

Success through the 1970s granted Kenzo social confidence. His unchanging bob of hair atop some outrageous outfit was familiar in the wildest clubs, including Studio 54 in New York, and he enjoyed gambling, once recouping a season’s production costs with a jackpot win in Deauville casino.

Discipline always returned him to work, and he never stopped being inventive, but fashion pulled away in the mid-1980s from his innocent fun and generous use of pattern and texture toward extreme sexuality and body-consciousness. Neither were his style: uncomfortable to wear and not always a pleasure to look at.

After his partner, Xavier de Castella, with whom he had created and built a completely Japanese house in Paris, died of an Aids-related illness in 1990, and his business manager had a stroke, Kenzo felt unsupported, and in 1993 he sold the company to the luxury goods conglomerate LVMH. He stuck it out as house designer until retirement in 1999. In 2005 he sued LVMH for royalties on the illegal use of his logo, a case settled out of court.

In 2004 he started a modest interiors brand, Gokan Kobo, meaning “workshop of the senses”. He began to paint again, self-portraits in kimono and in 2019 designed costumes for a production of Madame Butterfly for the Tokyo Nikikai Opera company.

Kenzo considered – but rejected – returning to Japan on his retirement and it was as a Frenchman, at last a Parisian insider, that he was made a chevalier of the Légion d’honneur in 2016. The Japanese government had awarded him its medal of honour in 1999.– Guardian