We need to talk about reopening schools, for everyone’s sake 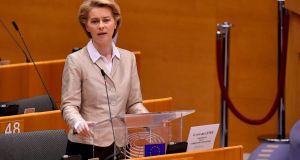 Donald Trump is talking incessantly about reopening the US economy. The EU Commission president Ursula von der Leyen spoke about “protecting livelihoods” as she launched a roadmap for lifting containment measures last week. Taoiseach Leo Varadkar has been talking about how we “will reawaken the sleeping giant that is our economy”.

All this talk of reopening the economy seems a bit tone deaf. It overlooks a tectonic shift that happened in all of our psyches over the last few weeks, when we found ourselves stripped of our busyness, and when the social signifiers of success we expended so much effort accumulating – the cars, gym memberships, packed social calendars – became obsolete overnight.

Our youngest citizens’ experience of the coronavirus pandemic has been unrelentingly awful. They have been locked out of school for five weeks; kept away from grandparents and their friends; banned from some shops; scowled at in the street; wrongly side-eyed as ‘vectors’, when in fact we’re all potential vectors.

Children, the group at least risk from the virus, need to see – even if it’s only for a few days in June – that the world is still a relatively safe place. They need a return to some kind of routine, and the opportunity to socialise.

We should be exploring how we can follow Denmark, which reopened primary schools last week or Iceland, which never closed them at all. Instead, we seem to be in danger of kicking the question of schools reopening right down the road until autumn.

It was reported last week that the Department of Education is looking at the possibility of the new school year for secondary students not beginning until later in September – if that applies across the board, children will have missed six months’ of school.

Assuming – and these are still significant assumptions – that we really have already reached a plateau; that we can get large scale, rapid, reliable testing and tracing systems in place in time; that the health system is coping and public health experts are in agreement, we should aim to reopen schools in some form before the summer, and we should start with primary schools.

It won’t be risk free, but nothing is anymore. Until there is a therapeutic intervention with a 95 per cent success rate or a vaccine, we are going to live in the shadow of coronavirus.

“Any level of gradual relaxation of the confinement will unavoidably lead to a corresponding increase in new cases,” the EU Commission roadmap warns.

This is not to suggest that we blithely pack children off with a full lunchbox and our hearts in our mouths in a few weeks’ time. Reopening of schools should be done in a staggered way to minimise risk to students, staff, and their families.

Luckily, Denmark has created a template for us. There, desks are set up two metres apart. Children take separate breaks, play in groups of no more than five, and wash their hands throughout the day.

Accommodating all of that here might mean just one or two classes returning at a time, for a day or two per week. It is going to demand flexibility, adaptability and creative thinking on the part of everyone.

Parents who want to continue home-schooling should be given the choice; in Denmark, 15 per cent have decided not to send their children back. Children at greater risk, or those with at-risk family members, should delay their return. Teachers who have their own health concerns, or who don’t have childcare, could also be accommodated in a staggered return.

The argument for this is not just a social one. Anecdotally, it’s clear that many schools are running fully fledged online classrooms, but others have been treating the closures as an unofficial extension of the holidays.

Then there are students who can’t continue with learning, because they don’t have access to either the technology, or the uninterrupted spans of parental attention required to manage it. For every day schools stay closed, those gaps are widening.

There is an economic case to be made too, although it shouldn’t be the primary one. Governments and employers frequently behave as though childcare happens by magic, in another realm over which they have no domain. While many employers seem to be cutting employees who are not able to work full tilt during the crisis some slack, others are continuing to apply the old childcare magical thinking. Getting children back to school, even for just a few days before the holidays, would ease the pressure on everyone.

Although the EU roadmap makes no specific recommendations on at timeline, it puts schools and universities at the top of a list of public gatherings that should be progressively permitted. It suggests that – when all of the public health conditions are met – reopening should allow for specific measures including “different lunch times, enhanced cleaning, smaller classrooms, increased reliance on e-learning”.

When you’re in crisis mode, the urgent invariably overtakes the important. The plight of Leaving Cert students – which does urgently need to be resolved – has hoovered up all the attention about how this crisis is impacting on education.

The impact on other primary and secondary children– on their mental health, their general wellbeing and their learning – may be less urgent, but it’s no less important.