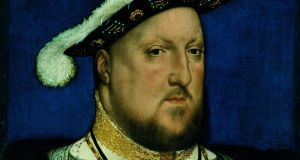 Henry VIII by Hans Holbein. He lived in terror of “sweating sickness”, or the “English sweat”, as it was known for a time. Museo Thyssen-Bornemisza, Madrid

On this date in 1551, there broke out in England the last known epidemic of “sweating sickness”, or the “English sweat”, as it was known for a period, because of its apparent exclusivity to that country.

The first cases were in Shrewsbury, on the Welsh borders. But by summer it was raging in London and elsewhere, claiming lives with trademark rapidity, even among “grett ryche men and women”, as one account recorded. Before the panic ended that autumn, celebrity victims had included the “Yonge dukes of Suffoke […] both in one bed.”

To modern ears, “English sweat” might sound like something Churchill called for more of in a patriotic speech of 1940. It would be no surprise if it featured in the Brexit debates either. But the concept was dreaded in medieval England, not least among the aristocracy, who seemed to be at as much risk from it as the poor.

Ironically for patriots, the first recorded outbreak occurred in 1485, within days of the Battle of Bosworth Field. Henry VII had just prevailed over the wicked Richard III, ending the long War of the Roses. But a week later he and his followers entered London in triumph, bringing the mystery illness with them.

Typically progressing a sudden fever to death within 24 hours, the sickness thrived in the crowded, unsanitary capital. Wealth and power were no defence. According to Chambers Book of Days, “two lord mayors and six aldermen, having scarcely laid aside the state robes in which they had received the Tudor king, died in the first week”.

It was noted then that, although the year-long epidemic desolated England’s western shores and northern border counties, it did not spread to Ireland or Scotland. Even Irish people in England were said to be immune, as were those of French birth in Calais, then an English possession, where it did penetrate.

In fact, during later outbreaks, it proved just as deadly in Germany and other parts of the continent. But in the meantime, it was dubbed Sudor Anglicus, the English Sweat, and some considered it a moral judgment, even if opinion was divided as to which sins of England it was punishing.

A well-known sinner of the 16th century, Henry VIII, lived in terror of it for a time.

During another epidemic in 1528, he fled London with his first wife, Catherine of Aragon, and tried to outrun the disease by travelling constantly, sleeping in different places each night.

Finally tiring of this, says Chambers, he settled at Tittenhanger, “to await his destiny”.

There, “he lived in total seclusion from the outer world, the house being surrounded with large fires, which night and day were kept constantly burning, as a means of purifying the atmosphere.”

Even in England, the disease was not bad news for everyone. Its apparent predilection for infecting rich people made it a career opportunity for ambitious doctors, at least.

And the 1551 outbreak produced one such man in John Kays, who later promoted himself to Johannus Caius (a standard career move then) while advising wealthy patients that they could minimise the risks by not breathing in mists or eating rotten fruit and by exercising regularly.

The exercise may have helped, if nothing else. As for the rest of his expertise, he wrote it all down in 1552 in “A boke or counseill against the disease commonly called the sweate or sweatying sickness”. The book’s wisdom was not to be tested, however, because the disease had vanished from England the year previously, never to return.

Something similar surfaced more than a century later in northern France, where it was called the “Picardy sweat”.  That too soon disappeared, leaving medical historians unsure of exactly what it was. The best guess is a kind of hantavirus, a rat-borne disease named for a river in Korea where a 20th-century outbreak was observed and analysed.

The sickness may have claimed at least one other famous victim in England, albeit a fictional one, after its official disappearance. In the epilogue of King Henry IV Part 2, setting up the sequel, Shakespeare teases readers that his great comic character, Sir John Falstaff, may “die of a sweat” in the next play.

After an apparent change of plan, he instead revived Falstaff for a starring role in the Merry Wives of Windsor, a hack job written in a hurry, possibly after Queen Elizabeth I had mentioned she was a big fan of the character. But by the start of Henry V, Sir John is indeed dead, without even making an appearance. On a happier note, we are informed that he went out with a “smile”.

1 Covid-19: Hairdressers, gyms and religious services could return next week
2 Bloomberg ranks New Zealand top in fight against Covid-19 - but how did Ireland fare?
3 The beginning of the end: 10 things to know about Covid-19 vaccines
4 Alison Curtis: My guilt at not going for a second pregnancy
5 How to gift your child a house deposit . . . tax free
Real news has value SUBSCRIBE