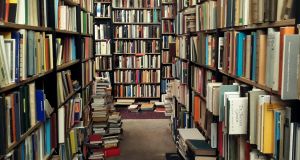 “I want four yards of books, please. They must be red and not taller than eight inches” Photograph: Getty Images

Further to the belated golden age of bookshelves – or at least their ubiquity as backdrops in TV interviews (Irishman’s Diary, April 15th) – my attention has been drawn to a story from an earlier era, in the writings of Lawrence Durrell. It was reprinted, Richard Pine tells me, in The Antiquarian Bookseller (New York 1962).

“I once heard a loudly-dressed man in a bookshop say: ‘I want four yards of books, please. They must be red and not taller than eight inches’ [wrote Durrell]. This happened in 1932 but I can still remember the expression of the faces of the other customers. They stared in horror at this airy, unconcerned cad, who contented himself by swinging a cane and adding inconsequentially: ‘It’s for my yacht.’ My only regret after all these years is that I did not ask for his autograph so that I could publish the name of this transpontine booby to the world. Four yards! One’s blood runs cold. But this is not all. He wanted to tear the covers off and make a false book-shelf to house a cocktail-cabinet! The bookshop assistants were white to the lips, as well they might be. As for old G., the silver-haired bookophage who owned the shop with all its priceless treasures, he gazed wildly about him in search of some tome large enough to aim at the head of this unwanted customer. Finally, he walked silently to the door and held it open. His courtesy was not the less cutting for being exquisite. ‘I am sorry, sir,’ he said, ‘we don’t sell books on that principle. Never have. Never will.”

Such vulgarity as the yachtsman’s would have beyond the help even of Myles na gCopaleen’s celebrated book-handling service, which was aimed at people who at least cared enough about literature to want to pretend they had read the stuff in their libraries.

But the atrocity reported by Durrell may not have been an isolated (book)case, even among the yachting fraternity.

I recall that fake book spines hiding cocktail cabinets were also a feature of Salman Rushdie’s 1990 novel Haroun and the Sea of Stories.

That too was on a yacht, the one owned by corrupt politician Snooty Buttoo, which carries the hero to his ultimate showdown with an arch-villain who hates all stories, everywhere, because they can’t be controlled.

The novel was ostensibly for children, although clearly inspired by the plight that Rushdie’s previous book, the Satanic Verses, had landed him in with another outlandish character. Happily, in the children’s tale at least, all the bad guys, including the book-faking yacht-owner, get their comeuppance in the end.

Durrell’s anecdote set me reading about how the adjective “transpontine” ever acquired its vaguely derogatory sense.

As anyone with even a smattering of Latin knows, it means “across the bridge”.  But as a prefix to any term of abuse, it adds to the insult. And given the context, I wondered if it had nautical origins.

Was the implication that spending too much of your life on the bridge of ship, drinking the secret contents of hollowed-out books at night, marked you as uncultured? No. The word comes from conventional bridges –the ones that cross rivers, especially in cities, and above all London. That’s where the insult arose, inspired by those who trod the boards of theatres rather than ships.

In the early 19th century, the south bank of the Thames was home to many theatres whose output and clientele were both looked down upon by polite society.

“Have they not given a taint to the very districts they belong to?” asked one commentator in 1846. The “appalling amount of loathsome vice and depravity” presented there, he said, “goes beyond Eugène Sue [a popular French novelist] and justifies the most astounding revelations of Smollett [a Scottish equivalent].”

As seen from north of the river, in Covent Garden or the Haymarket, these melodramas of the lower orders were “transpontine”. The insult stuck, gradually transcending its London origins to become a term of all-purpose disparagement.

Dublin is famously a city of two transpontine halves, mutually contemptuous. Cork is not immune either, although geographically more complicated.

Speaking of Covent Garden, I remember once asking a Cork person her opinion of a redevelopment of the historic Shandon quarter, which had been supposedly transformed into a local version of the fashionable London district.

My friend, whose life revolved around Cork’s central island, which includes Patrick Street, the English Market, and the Opera House, was casually damning.

“Ah no,” she said, after thinking about it for a moment. By way of final judgment, she added: “You’d never cross the bridge really.”