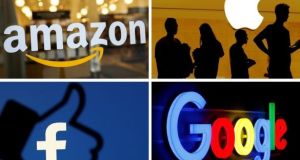 Big tech will win big in this pandemic. Photograph: Reuters

We’re having coffee dates on Houseparty, meetings on Hangouts, seeing the family on Zoom. Children are star jumping with Joe on YouTube, submitting their homework to Google Classroom and livestreaming their Easter Egg hunts for grandparents.

Social historians might look back on this moment and be astonished by how instantaneously we adapted to the remote life. But the truth is we’ve been practising for years, allowing ourselves to be slowly fused to our couches by streaming services and social media.

The difference, now, is that we no longer have a choice. Apps that were once novel or frivolous have become utilities. The only cost of access to them is working wifi, and a willingness to park our qualms about the unstoppable creep of technology.

The sense that these tech behemoths were growing fat on the spoils of our secret selves; our uneasiness about Silicon Valley’s sometimes creative approach to taxation; the troubling implications of the Cambridge Analytica affair; the proliferation of fake news and extreme content – all these once-urgent concerns have shrunk into insignificance alongside much more immediate ones.

Like how to keep earning. How to stave off loneliness. How to stay alive. These basic survival needs have forced even the most resistant of us into an uneasy truce with technology.

It has become clear, too, that coronavirus will not be defeated without technology and access to some form of aggregated health data. With those odds at stake, another erosion of our privacy feels like a small price to pay.

Meanwhile, a steady dripfeed of compassion from big tech has helped to smooth away any of our lingering disquiet about its growing influence. The Gates Foundation is stumping up $100 million (€92 million) for research into coronavirus vaccines and therapeutic treatments. Facebook’s Mark Zuckerberg and his wife Priscilla Chan are giving $25 million (€23 million).

Twitter and Square founder, Jack Dorsey, is donating 28 per cent of his wealth. Amazon’s Jeff Bezos is pledging $100 million (€92 million) for American food banks. Apple has donated 20 million masks, the first batch of them to a hospital in Silicon Valley – arguably not the world’s neediest people, but let’s not be picky.

These acts of beneficence are being made by individuals of such immense wealth that, no matter how hard they tried – even if they were to commit every day for the rest of their lives to standing over a toilet bowl, ripping up €20 notes and flushing them away – they would never be able to get rid of it all. But, look, why dwell on that now?

As the news cycle fills with the increasingly craven and unhinged ramblings of Donald Trump, troubling questions about who is actually running Britain and the existential threat faced by the euro zone, tech billionaires are stepping in to fill both the resources gap, and the vacuum in moral leadership. They’re tackling misinformation.

They’re providing practical tools to defeat the virus. They’re putting their hands in their pockets and suggesting others do the same. Gates is offering calm reassurance and a way forward. Bezos is posting about food insecurity on Instagram. There’s a cosy solidarity about it all, a feeling that coronavirus, also known as Covid-19, is a great leveller.

But as the Newsnight presenter Emily Maitlis reminded us so eloquently during the week, the great leveller notion is one of the most egregious myths about coronavirus.

The pathogen may not care whether it lands in the mucus membranes of a billionaire tech founder, a prime minister or an intensive care nurse – but having the resources to retreat from the world certainly helps keep it at bay.

If you’re not Ellen DeGeneres – who sparked a backlash this week for her gall in comparing her quarantine experience to prison, as she sat on her verandah overlooking a vast, pristine lawn – and are locked down in a cramped flat rather than a Californian ranch, it’s infinitely harder.

So no, it’s not a leveller. Silicon Valley has not been levelled by this pandemic. Online advertising has collapsed, but what the markets are now calling the “stay at home stocks” are cushioned by large cash piles.

Messaging activity on Facebook is up 50 per cent in some countries. Amazon can’t get enough personal protective equipment for its staff, but it’s still planning to hire 100,000 new workers to keep up with demand. In the United States, antitrust investigations against Alphabet and Facebook have been effectively put on hold.

None of this to say is that big tech’s altruism is not genuine. But it is possible to act out of both compassion and self-interest simultaneously. The solution is not for us to reject the technology, not now that our survival feels increasingly dependent on it. But we shouldn’t lose sight of who these benevolent billionaires really are. They are not democratically elected leaders, and we shouldn’t make them our moral northern stars.

They are a cohort of clever, entrepreneurial, often secretive individuals who could have stopped working years ago if their only goal was the accumulation of wealth. A few, like Gates, genuinely appear to want to give back. For some of the others, you have to assume that it is power that keeps driving them.

Just like we have an opportunity to press reset, so do they. They can decide to stop treating their customers as products. They can stop focusing primarily on shareholder enrichment, and spend more time exploring the implications of the world they’re creating. Before the crisis, their influence over our lives was unparalleled.

When we emerge from it – their products even more deeply embedded, their reputations glowing brighter – that influence will be unimaginable. Former Google CEO Eric Schmidt predicted last week that “the strongest brands and the strongest companies . . . will emerge stronger”. Big tech will win big in this pandemic.