State intervention may only deepen divide and it could prove counterproductive 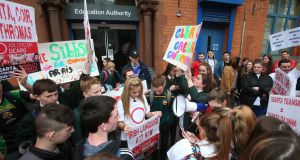 Recently, more than 100 unionists in Northern Ireland put their names to a letter urging nationalists to discuss building a “society for the betterment of everyone”.

The move was in response to a letter from “civic nationalism” that had urged Taoiseach Leo Varadkar to protect the rights of Irish citizens in the North. In their letter, the unionists call for “a transparent and inclusive debate concerning rights, truth, equality and civil liberties”.

That is a hell of a big ask in the North, but the request needs to be given proper consideration. The signatories “find it frustrating and puzzling that civic unionism, pluralists and other forms of civic leadership have been rendered invisible in many debates focused on rights and responsibilities”.

Nationalists also have reason to express concern about their status given current uncertainty about Brexit and Taoiseach Leo Varadkar acknowledged in December that one of the failures of the southern State historically was that it left Northern nationalists “behind”.

Almost 20 years after the Belfast Agreement, the letters underline the frustrations at the enduring, if not increasing polarisation in the North. Whatever hopes existed that cross-community integration might facilitate a broad healing have faded. One of the signatories of the recent letter from civic unionism was solicitor Trevor Ringland, a former Ireland rugby player and member of the Ulster Unionist Party who has elaborated on his thoughts in the Sunday Business Post. He sees himself as a unionist who is “comfortably Irish” and emphasised what those involved in rugby had achieved to bring people together who were constitutionally apart. He also observed that the Irish language was flourishing in the North but there was a unionist fear that an Irish language Act would be used to “deepen divisions rather than heal them” and that “if given the opportunity, civic society here could find an acceptable solution”.

This is an important point, too often overlooked. There is much preoccupation with “legacy issues” from the Troubles, but there are longer-term “legacy issues” arising out of the events of 100 years ago that have been addressed fairly, imaginatively and honestly in recent years by both civic unionism and civic nationalism beyond the fray of polarising politics.

The way these commemorations have been approached in such a divisive society could well provide a template for dealing with some of the current contentious issues, including the Irish language, as Ringland suggests. With all the focus on the 1916 commemoration in the Republic there was not enough appreciation here of how the delicate issue of centenary commemorations in the North from 2012-16 was managed. One of the crucial points about their success was that they were not led or driven by politicians. Groups such as the Community Relations Council (CRC) and the Heritage Lottery Fund combined to encourage thoughtful debate and a pluralist response to the centenaries with an emphasis on events that could deepen understanding of the period with a strong emphasis on “respectful listening”, multiple narratives and the insistence that both communities “must travel”.

If the language issue is in a very healthy condition, is the best thing for it legislation that would inevitably be divisive?


One of the reasonings was that such an approach could “underpin future community relations work”. As the CRC put it: “Remembering in public space could have at its heart a commitment to reflect the variety and complexity of cultural life… to create gateways for engagement and to resolve political issues in a way that is consistent with the overarching values of equality, human rights and reconciliation.”

Could the language question be approached in the same way? If it is in a very healthy condition, is the best thing for it legislation that would inevitably be divisive? The experience of the South is a reminder that heavy State intervention is not a recipe for success. By the 1950s, many aspects of State promotion of the Irish language had failed. As historian Gearóid Ó Tuathaigh has noted: “The ritual symbolic use of Irish by politicians was frequently so limited that it seemed no more than tokenism and the degree of real penetration of Irish in the apparatus of the State continued to disappoint. Crucially, the evidence was unmistakable that insisting on competence in Irish for entry to the public service did not guarantee increased use of Irish in the actual services being supplied to the public.”

Nor did State policy on preserving vibrant Gaeltacht areas work and, ultimately, it was “the voluntary efforts of parents and language activists rather than State policy or planning or policy” that was the driver of the more recent Irish-medium school movement.

Of course the Irish language issue in the North is part of a broader canvas covering ethnicity, rights and power and indeed the “liberties” referred to by civic unionism. Those who signed the 1998 Belfast Agreement committed themselves to “understanding and toleration” in respect of cultural diversity, including language. Given the inability of politicians to agree on how to give meaning to that, it might be wiser in Northern Ireland to think civically rather than politically about the Irish language.