The retaliatory measures announced by Theresa May are strikingly modest 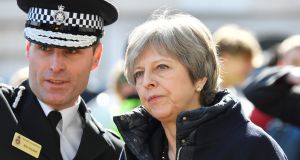 British prime minister Theresa May on a visit to Salisbury, where former Russian intelligence officer Sergei Skripal and his daughter Yulia were poisoned with a nerve agent last week. Photograph: Toby Melville/Reuters

The joint statement yesterday by the leaders of France, Germany, the US and the UK, in which they said Russia was highly likely to have been behind the Salisbury nerve agent attack, was an important signal of solidarity. But London’s lacklustre response to the atrocity and the absence of any co-ordinated international action suggest Moscow will not suffer any meaningful punishment.

Russia has denied involvement in the appalling attempted murder of double agent Sergei Skripal and his daughter Yulia, but there is no plausible alternative explanation. Moreover, Russian denials generally don’t count for much. This is the government that denied its soldiers were in Crimea on the eve of its annexation in 2014; that denied its agents or equipment were involved in the shooting down of a passenger airliner over Ukraine the same year; and that claimed it was intervening in Syria only to take the fight to the jihadis rather than to save its ally, Bashar al-Assad. This is the government that denies any effort to meddle in the 2016 US presidential election and that denies even possessing the Soviet nerve agent, Novichok, that was used in Salisbury.

The retaliatory measures announced by Theresa May are strikingly modest. The expulsion of 23 Russian spies will hurt Moscow’s intelligence gathering in the short term, but deep-cover agents will remain and the operation will recover. May used language and tactics reminiscent of the Cold War, but instead of underlining the gravity of the situation, this underlined how British thinking on Russia is mired in the past.

If May wanted to hurt Moscow, she would go after its money. Billions of euro in Russian wealth has been sloshing through the British economy in recent years, much of it invested by Putin’s allies. May spoke this week of a law to allow the government seize assets gained from corruption, but that law has been in effect since last year and has hardly been used. If London were serious, it would crack down on criminal assets on its own soil. That would have painful consequences for Britain, but the moral case for action is clear.