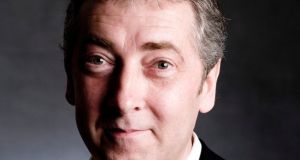 Not much can be said with certainty about the Battle of Mag Rath, which happened near what is now Moira, Co Down, in 637.

But we know it was big, because the annals say it lasted a week. And we know it was bloody too. When the area was excavated for a railway in the 19th century, they found enough human and equine bones to support the view that it may have been the largest single conflict ever on this island.

But the Battle of Moira was also indirectly responsible for one of the great Irish literary epics, Buile Suibhne (“The Madness of Sweeney”), even if the doomed protagonist of that story is even murkier than the event itself.

According to some histories, the Sweeney in question was king of Dal Riada, whose forces were defeated at Moira by the High King of Ireland, Domnall II. He may on the other hand have been entirely fictional.

Either way, his tribulations are said to have begun when he tangled with another rising power, the church. Hearing that his territory was being earmarked by St Ronan for an ecclesiastical construction project, the king rushed from his home, enraged, to refuse the holy man planning permission.

In what would become an important detail, his wife tried to stop him by grabbing his cloak, which unfurled, leaving him naked.

It was in this state that he grabbed Ronan’s psalter and threw it in a lake. The psalter was later returned by a magical otter. But unappeased, the saint cursed the king, condemning him to wander the world for the rest of his days, naked, and flying like a bird.

So it came to pass. In the epic, Sweeney flees the Battle of Moira, driven mad by the noise.

Then he acquires aerial powers, sprouts feathers, and takes to the trees. Crucially, his madness is accompanied by a talent for poetry, so that the description of his subsequent tribulations, and of the many locations through which he passes, is a classic of early literature.

The real-life 12th century poet who wrote it is now unknown. But the work has inspired many modern-day writers, from TS Eliot to Flann O’Brien.

Eliot planned a verse drama based on the story, and although he didn’t see it through, wrote enough for a small poetry collection, Sweeney Agonistes, in 1932.

A few years later, the feathered madman also turned up among the anarchic cast of Flann O’Brien’s debut novel, At Swim-Two-Birds. That title comes from Snámh Dá Éan, near Clonmacnoise, one of the king’s many places of exile.

But in O’Brien’s book, as Sweeney continues to eulogise the trees in rich Irish, while still naked, he is further tortured by the company of misfits whose idea of poetry includes “A Pint of Plain is Your Only Man”.

By contrast, his story was also told by Seamus Heaney, who in 1983 reworked an earlier translation as Sweeney Astray. And now there’s Neil Martin, the Belfast composer, who on St Patrick’s Day at the National Concert Hall will become the latest in a long line of artists to bring the cursed king back to life, this time by setting his misadventures to music.

Martin was a friend of Heaney, and played at his funeral. So when he was commissioned by RTÉ to write a new work, he opted for a song-cycle based on the Nobel-winning poet’s version of Buile Suibhne, thereby continuing an association that began at the Field Day Theatre in Derry in 1988.

Another veteran of that place and time, actor Stephen Rea, will narrate the story, while the singing will be by Iarla Ó Lionáird, direct from a week of selling out the same NCH with The Gloaming.

In a line-up worthy of the winning side at the Battle of Moyra, the Martin-Heaney-Rea-Ó Lionárd battalion have the RTÉ Concert Orchestra on their side too.

Saturday’s world premiere of Sweeney will be preceded by an older Martin work, OSSA, of great historical aptness.

That was inspired by the story of Hugh O’Neill, who after defeat at Kinsale, led the Flight of the Earls in 1607, ending his days in Rome, where hopes of a return to former glory petered out amid Europe’s changing political realities.

So both Sweeney and OSSA (Latin for ‘bones”, from an inscription on O’Neill’s grave) concern flight and wandering.

They also represent the two extremes of an era in Irish history.

The O’Neill dynasty’s epic reign in Ulster had begun with the Battle of Mag Rath.

Unlike a certain reich, it really did last 1,000 years.

1 Ireland among countries urged to consider reinstating Covid-19 restrictions
2 One further Covid-19 related death and 35 new confirmed cases reported
3 Ward at Naas General Hospital closed due to suspected Covid-19 outbreak
4 Government begins work on new medium-term plan for Ireland in Covid-19 era
5 ‘I’ve been sleeping with my girlfriend’s sister. I need help. What do I do?’
Real news has value SUBSCRIBE