Diarmaid Ferriter: Taoiseach should learn from Blair on the dangers of the ‘constant campaign’ 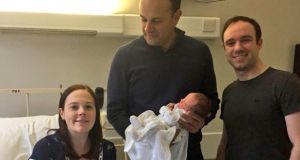 At the height of the recent bad weather, Taoiseach Leo Varadkar tweeted a photo of himself visiting Holles Street hospital.

Writing about Leo Varadkar in 2012 when he was minister for transport, tourism and sport and the then cabinet’s youngest member, Mary Minihan of this newspaper gave a succinct assessment: “A commanding media performer with an unusual penchant for answering questions directly, Mr Varadkar’s future is bright.”

There was quite a consensus about that perception of Varadkar, but there have been indications since he became Taoiseach that his preoccupation with media coverage and spinning is unhealthy and shallow.

The appointment of the Strategic Communications Unit was ill-advised and inevitably backfired. The furore over how the National Development Plan was communicated regionally and nationally can only generate cynicism and suggest that far too much attention is devoted to presentation over substance and that the lines between party political and Government communications are deliberately blurred.

Varadkar should consider the fate of the British New Labour communications strategy from the late 1990s and how, while it may have initially generated no shortage of positive coverage of Tony Blair, it was ultimately exposed as hollow and self-serving.

What was promised by New Labour from 1997 was something new: in Gordon Brown’s words it was supposedly about a government and style of politics that would be seen as “not monolithic, top down or impersonal, but personal to all”.

Varadkar has long made similar noises and also insisted “a key part of the modernisation of Government communications is the greater use of social media”. What is also clear, however, is that this form of communication, while useful, is too often shallow, simplistic, lazy and inane. Constantly firing out messages and seeking to control or direct coverage can also generate a toxic relationship between media and politics.

In the introduction to his diaries, published in 2007, Campbell bemoaned the “media bile that came our way”. That onslaught, Campbell made clear, was always the fault of someone else.

He maintained that his time with Blair had resulted in his respect for journalists and newspapers plummeting, and that saturation coverage of politics became a cynical pursuit of the irrelevant foibles of decent men in power; that journalists were out to “get” senior politicians who simply wanted to get on with the job for the benefit of the governed.

These assertions were exceptionally arrogant and hypocritical. He maintained in his book that the media “seems to me to have lost any sense of perspective about people in power, or sense of responsibility about how politics and politicians are seen, and the impact on our democratic health”.

In other words, what Campbell wanted, when he discovered he could not get all the newspapers to do his bidding, was unfettered power for the British prime minister, no accountability and no critical scrutiny.

Campbell characterised journalists as people “who believe their role is not to impart information and fuel healthy debate, but to undermine where possible the actions, decisions and motives of politicians”.

But undermining others is precisely what Campbell spent much of his own time doing. Indeed, he seems to have seen it as an intrinsic part of his job, and those who sought to get beyond the spin to seek the truth were disparaged and dismissed.

It was Campbell and Blair who slavishly courted and attempted to manipulate the media in order to ensure favourable headlines; it was they who leaked, spun and deceived when it suited them and then complained, as Blair did in his final days, and as Campbell did in his book, about the media having encroached too much. The preoccupation with spin revealed a side to Blair and Campbell that was infantile and irritating.

The relationship between the media and politics is, of course, symbiotic, as highlighted in the 2014 book edited by DCU academics Mark O’Brien and Donnacha O’Beacháin, Political Communication in the Republic of Ireland. In relation to social media, the book includes the suggestion “Irish voters are not quite ready for an exclusive virtual relationship with their public representatives”. But the book also underlines that modern-day politics is about the “constant campaign”, where profile is all-consuming and obsessed over.

As the former government press secretaries who gave interviews for this book acknowledge, however, politicians are mistaken if they think that churning out “good” news to the media is the function of a government information service.

Nor does a Taoiseach need to speak to every microphone. During the recent dangerous weather, for example, it was not necessary for Varadkar to make numerous announcements when we already have Met Éireann and a National Emergency Co-ordination Group to do precisely that. Nor is a so-called “private” trip to Holles Street hospital by the Taoiseach any such thing when he is accompanied by an aide who tweets numerous photos of the visit.

An able and confident Taoiseach should do less tweeting and grandstanding and offer fewer, more considered responses.

1 Covid-19: Pressure over breakdown in tracing system intensifies as State enters Level 5
2 One hundred Irish retailers for all your online Christmas shopping
3 Life under Level 5: Where can I go, who can I see, what is closed?
4 Thousands of gardaí mount checkpoints and patrol parks, beauty spots
5 Developer’s impeccably restored Fitzwilliam Square Georgian for €3.5m
Real news has value SUBSCRIBE