Diarmaid Ferriter: Both sides to the Brexit debate can lay claim to Churchill

In recent years, the Tory simplification of British history has been nakedly political 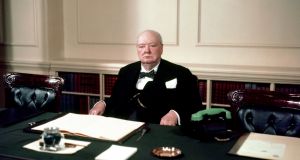 Sir Winston Churchill, January 1954: his contribution to wider history was such that he was a personal hero of former Taoiseach Garret FitzGerald. Photograph: PA/PA Wire

The actor Gary Oldman’s love affair with Winston Churchill has extended well beyond his screen portrayal of the wartime prime minister in Joe Wright’s film Darkest Hour. Accepting the best actor award at the Bafta ceremony in London last week, Oldman declared: “In those dark and uncertain days he held the line for honour and integrity and freedom…for his nation and the world. I thank you, Sir Winston.”

Lest ardent Brexiteers seize on such assertions about Churchill to add historic weight to their arguments, Oldman is also on record as insisting that Churchill would not have been in favour of Brexit: “His patriotism was never about sovereignty or Trump style… He knew what could be the main contribution to Europe of our country: the defence of democratic values.”

Boris Johnson, however, the British foreign secretary and author of The Churchill Factor (2014) was keen in his book to portray the EU as central to the suffocation of British spirit, and during the Brexit referendum argued that contemporary British identity was bound up with liberating the continent: “a chance for British people to be the heroes of Europe” and to fashion “a democratic liberation” of Europe through Brexit, despite the fact that Churchill was an advocate of a European Union.

Such was his political longevity and wordiness, and his contradictions and inconsistencies that both Brexiteers and Remainers can find the Churchill they want. So can the Irish. I’ve argued before that Churchill’s mind was saturated with imperialist assumptions, and while he seemed, at different stages, to be prepared to evolve his thinking, self-serving political requirements and calculations invariably dragged him back and that had profound implications for Ireland.

Alan Brooke, chief of the imperial staff during the second World War, gave this spiky assessment of Churchill: “Winston had 10 ideas every day, only one of which was good, and he did not know which it was.” Films such as Darkest Hour are apt to take great liberties with history, not just inflicting bruises but also sometimes gaping wounds. A scene in which Churchill storms out of his chauffeur-driven car, takes the underground and converses with a group of multiracial commuters to ascertain the appetite for resistance to a potential German invasion, is highly theatrical and absorbing but also farcical fiction.

But Churchill did not stand alone. Great injustice is done to the Labour leader Clement Attlee, who is dispensed with at the start of the film after he intemperately attacks Churchill’s predecessor Neville Chamberlain. Attlee then disappears, but the reality was that Attlee’s membership of and contribution to the Churchill led war-time government was immense, as underlined by John Bew’s biography Citizen Clem (2016). Attlee was intrinsic to stiffening Churchill’s resolve against his Tory opponents, and both Attlee and Churchill came to admire each other.

In recent years, the Tory simplification of British history has been nakedly political. During the centenary of the outbreak of the first World War, Michael Gove as education secretary insisted its commemoration should be about “battling left-wing myths that belittle Britain” and he lambasted historians who “denigrate patriotism”. This was another attempt to ignore the contribution of the left to that war effort.

There is so much contemporary focus on the tortured Tory approach to Brexit that the framework for our interpretation of this vital issue is far too narrow. It suits some Brexiteers, of course, to portray themselves as supposedly Churchillian as a bulwark against EU domination, but the British Labour Party also needs to be a crucial part of the discussion about Britain’s relationship with Europe, just as it was during the second World War, despite the myths peddled by cinematic portrayals of Churchill. The Labour Party today, however, is not doing nearly enough to make itself heard and relevant amid Tory infighting and cacophony.

1 A vegetarian and a non-drinker visit Ireland: here’s their verdict
2 Are there annual limits on inheritances or gifts to a child?
3 Leaders’ debate: For one dramatic moment, the Taoiseach is like a rabbit in headlights
4 ‘I don’t know if he died . . . but I don’t want him in the Tuam tanks’
5 Miriam Lord: The left limbers up to woo Mary Lou
Real news has value SUBSCRIBE