Cliff Taylor: Government spends big but the economy remains on a knife-edge 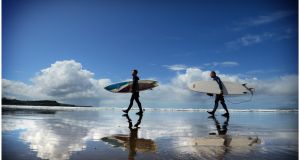 Rossnowlagh Strand in Co Donegal: staycation scheme will be popular but may give people a refund on money they would have spent anyway. Photograph: Bryan O’Brien

It isn’t often that a government can pump billions of euro into the economy and still be so unsure about its impact on growth. Yet we all know that the vital thing to count in the months ahead is not the amount of cash the Government is spending, but the daily number of new cases of Covid-19. To revive the economy, first and foremost we have to control the virus.

We are still in the emergency stage of trying to limit the economic damage. For the moment the challenge is to hold on to as much of what we have as possible. The first job is replacing the cash taken out of the economy – by the closure of much of the private sector for a period – with additional public money. And saving as many jobs as possible.

When the measures in the stimulus package are added in, the scale of the injection of public funds since the crisis started is big – very big. Public spending is now running €16 billion higher for the year than expected before the crisis hit and when falling tax revenues are also counted in the deficit will climb towards €30 billion. This is within the range previously indicated by Minister for Finance Paschal Donohoe – indeed if recent tax trends continue, the borrowing figure could still ease back a bit.

The Government has now gone big on this and while it will still have a few bullets to fire later in the year, it has used up a fair bit of its ammunition. In particular, extending the wage subsidy scheme until next April will cost the guts of an extra €2 billion and is by far the most significant announcement. Even though payment rates will fall, it will give businesses some certainty heading into 2021 – and many still desperately need the support.

The national economic plan due to be published in the autumn will try to make sense of what this means for the long-term fiscal outlook. Previous work by the Irish Fiscal Advisory Council suggests that if the virus is controlled, the public finances can gradually turn the corner back to sustainability. But were Covid-19 to persist in hitting activity in a serious way well into 2021, the numbers would start to look more difficult. We are walking a delicate line.

Yet there is no option but to act. The goal of the stimulus plan is to try to prevent further damage by stopping businesses from closing and trying to keep people in jobs. This is where the big money in the stimulus plan is going, particularly in the wage subsidy programme.The vital policy goal is to try to minimise what is called in jargon “scarring” – the long-term impact on the economy from the crisis. Unfortunately, no matter how much is spent, there will be a fair bit of this. The autumn may not look too pretty.

Elsewhere the plan tries to address a few of the obvious problems. SMEs have had to pay a lot of fixed costs despite being closed or trading well below capacity and will now benefit from larger cash grants and an extension in rates relief. There are a range of new programmes to help unemployed people retrain and encourage employers to take them on as employees or apprentices. One of the things we will see in the months ahead is the State moving back big time into jobs market policy.

There are plans to boost investment in a number of areas to support activity and packages for the arts and tourism sectors. Cutting the VAT rate from 23 per cent to 21 per cent will cost north of €400 million and is designed to boost investment – but it is hard to see it having a major impact on people’s spending decisions or on business margins. Better, perhaps to have used the money for more direct supports to key sectors – like tourism. Likewise the staycation scheme will be popular, but it will end up giving a lot of people a refund on money they would have spent anyway.

Some of this is more about politics than economics. But yet many of the worst-affected sectors say the Government should have done more. This goes to the heart of the problem of trying to get the economy going again. People remain nervous about a revival in the numbers catching the virus and a second or subsequent waves. For many, with savings built up during the lockdown, this is the key thing stopping them from going out to spend more. They are not short of cash, they are short of confidence.

And this points to the uncertainty facing many consumer-facing sectors of the economy, particularly in tourism and hospitality but also parts of the retail sector and the arts and entertainment sectors. For many sectors, while government support is vital for short-term survival, the real determining factor over the next few years will be how consumers behave. Are they happy to eat out, go back to work in the city centre, stay in a hotel, go to a gym, get on a plane and so on?

Ideally, economic policy would move out of the emergency phase and into longer-term planning by autumn. This is the intention, with the development of a national economic plan to accompany the budget. We must hope that we are out of the worst of the economic fire-fighting phase at that stage. But, as of now, we just don’t know – and health experts talk of a risk of a second wave in the winter.

With Brexit also threatening trouble, we are in for a bumpy economic ride.