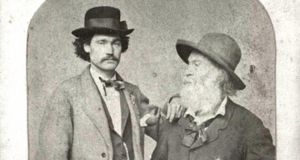 Born 200 years ago on Friday, Walt Whitman is now best remembered for his epic poem Leaves of Grass, which if it didn’t invent free verse, was certainly at the leading edge of that literary revolution.

But not the least remarkable thing about Whitman is that he may also have been the physical model for Dracula, as created by his great admirer Bram Stoker. And even if true, that is probably only the second most interesting Irish angle on the poet’s life, thanks to his long-time friend (and presumed lover), Limerick man Peter Doyle.

Doyle’s is a remarkable story in its own right. He was born just before the Famine (not in 1847 as he later claimed) and emigrated with his family at the age of eight on a ship that nearly didn’t make it, being severely damaged en route by storms.

Whitman’s homosexuality is generally assumed, rather than proven, although a later visitor from Ireland, Oscar Wilde, was in no doubt after meeting him

Like many emigrants to the US then, Doyle reached adulthood just in time to be enlisted for the civil war, during which, as a resident of Richmond, Virginia, he fought for the rebel South. At the Battle of Antietam, he was unwittingly on the opposite side to George Whitman, a brother of the poet he didn’t know yet.

But after being wounded at Sharpsburg in 1862, Doyle was discharged, so that by war’s end, he had become a conductor on a streetcar in Washington. That was how he first met Whitman, a passenger he thought looked like “an old sea-captain”, and with whom there was instant – and mutual – rapport.

The most dramatic incident of Doyle’s life during the civil war years, however, was a trip he made to the theatre on Good Friday, April 14th, 1865. Yes, it was Ford’s Theatre and the play was My American Cousin, which Doyle attended because he had heard President Lincoln would be there.

So he heard the fatal shot, saw John Wilkes Booth jump from the Lincolns’ box onto the stage, and witnessed all the subsequent chaos, up until a Union soldier shouted at him, “Get out of here! We’re going to burn this damned building down”, to which Doyle recalled replying: “If that is so I’ll get out!”

His eyewitness accounts probably inspired some of Whitman’s writings on Lincoln. And a Whitman historian, Martin G Murray – to whose work this column is indebted – has speculated plausibly that Doyle’s testimony was also an influence on the poet’s most famous short work, O Captain! My Captain!

Years after Whitman’s death, Doyle kept as a treasured souvenir an old coat the poet had worn

This casts Lincoln as pilot of a storm-tossed ship who dies on deck just as he has steered his vessel safely into harbour.  Murray suggests it may have been one of Whitman’s attempts to impress his young immigrant friend, who – even if he had fought on the wrong side of the war – would appreciate the metaphor

O Captain! My Captain! was the only Whitman poem anthologised during his lifetime. It had the benefit of brevity and its popularity was also helped by rhyme, untypical of the poet. Hence Murray’s suggestion that Whitman bowed to convention, for once, to appeal to the “limerick-spouting Doyle”.

Whitman’s homosexuality is generally assumed, rather than proven, although a later visitor from Ireland, Oscar Wilde, was in no doubt after meeting him.  Whitman’s letters to Doyle confuse the issue, perhaps deliberately, suggesting flirtations with women and even once describing himself as a “ladies’ man”.

And after the deadly riots surrounding a march of New York Orangemen in 1871, during which 60 people died, Whitman baited Doyle on three different levels, blaming “the Irish lower orders (Catholic)” for starting the row, and suggesting that a subsequent parade of those arrested had reminded him of the “squads of rebel prisoners” brought to Washington after the war.

Even so, he and Doyle were the closest of friends for most of the rest of Whitman’s life. They became estranged for a time towards the end, but that was less by design than accident of circumstances, resolved eventually.

Years after Whitman’s death, Doyle kept as a treasured souvenir an old coat the poet had worn and claimed it functioned like an “Aladdin’s lamp”, summoning the presence of his dead friend when needed.