Alex Kane: Unionists need to be ready for eventuality of Border poll 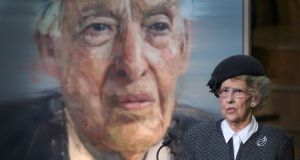 Surely, some argue, those losses, along with other shifts in opinion and electoral support, suggest that it is not unreasonable to conclude that a victory for unity in a border poll could be “likely”, albeit not certain.

Just a few years ago it would have been unthinkable for a leading unionist to countenance the possibility of unity anytime soon. So when Arlene Foster told Patrick Kielty in a documentary a few months ago that she would leave in the event of a united Ireland it sent a very important, almost Freudian message: a border poll was likely and unity was a possibility. Five years earlier she would simply have brushed the question away.

Since then other unionist leaders and opinion formers, including Mike Nesbit and Peter Robinson, have discussed the issue. A few days ago, Baroness Paisley, Ian Paisley’s widow, said it would take an “awful lot” to move her out of her home; “there are people of sense and sensibility who do not want to be fighting with their neighbours or their friends and who want to have it properly united.”

So it shouldn’t really have come as a surprise when Seamus Mallon addressed the issue. I disagree with him that 50.1 per cent wouldn’t be enough to constitute victory for unity: it would certainly be enough for me if it was the margin of victory for the pro-UK side.

But I do agree, having seen the political toxicity and chaos following the Brexit referendum, that it is essential to prepare for a border poll years in advance.

How is “likely” to be defined? Will the British and Irish governments take sides in the debate? How will unionism be accommodated? What would the border poll question be? Will the Irish government produce a detailed blueprint of what a newly united Ireland would look like?

In the same way that provision was made for an “Irish dimension” and mandatory power-sharing to protect and promote Irish nationalism in Northern Ireland from 1972 onwards, will there be similar “British dimension” and mandatory power-sharing provisions to protect and promote British and unionist identity in a united Ireland? Will there be a long-term financial commitment from the United Kingdom?

You’ll be adding your own list of questions by now, strengthening my point that all of these issues need to be addressed before – long before – a border poll, rather than after it: particularly if the result is an uncomfortably thin margin of victory for unity.

So, Seamus Mallon, Peter Robinson, Mike Nesbitt and Baroness Paisley are right: preparing for an inevitable border poll makes sense. I have spent too much of my life watching unionists failing to prepare for one train after another coming down the track; even though they will have seen the steam and heard the whistle.

We spend far too much of our time on the curt dismissal of a question or challenge and not enough on detailed analysis and clinical deconstruction. And almost always to the detriment of our long-term political, electoral and constitutional interests.

Engagement in the Irish unity debate does not mean preparing for an outcome you don’t really want. It doesn’t mean you’ve already conceded you may be on the losing side.

Engagement means challenging yourself as well as challenging your opponents. It means not always starting on the back foot. It means being prepared for all eventualities. Crucially, the internal debate is often much more instructive and important than the eventual debate with your opponents; because it’s the internal debate which gives you the real sense of what your own grassroots is thinking.

Sinn Féin’s electoral slippage in the polls on both sides of the border will encourage a feeling of “we’ve nothing to fear” relaxation from elements within unionism.

That would be a serious mistake to make: not least because a poll on election day indicated that 65 per cent of Irish voters favour reunification. The issue is bigger than Sinn Féin’s base.

At some point the very existence of Northern Ireland and “Ulster” unionism will be determined by a border poll. Unionism needs to be ready for that eventuality. It needs to be prepared for and able to answer the most fundamental constitutional question of all: is continuing membership of the United Kingdom preferable to a new beginning in a united Ireland?