Kathy Sheridan: Ask hard questions but beware of dangers of change for sake of change 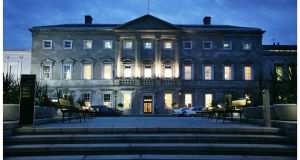 That we should never cling to nurse for fear of something worse but that change for the sake of change is what landed the world with Brexit and Donald Trump. Photograph: Alan Betson

During the 2007 election campaign, a reference by me to Fianna Fáil campaign headquarters as “Meltdown Manor” so galvanised its occupants that they put a spread bet of €3,500 on Fianna Fáil to win 68 seats, the odds rising for every seat won after that. FF won 80. It was a stunning turnaround. The backroom guys scooped €49,000.

The trouble is that to this day, some deny they were ever in meltdown. It’s not just pointless but damaging. It airbrushes the role of strategists and others from the picture but more than that, it denies important truths about our own behaviour. In public, we rail against cronyism, corruption, complacency, the health system, housing, indifference to the poor and vulnerable. But in the privacy of the polling booth? We do what we deem necessary to our survival, just as politicians do.

8 Spring clean: 13 ways to spruce up your home – with or without a tradesperson

12 ‘We should have done better’: Cillian de Gascun, Paul Reid and Stephen Donnelly look back

13 Wood burning stoves: The inconvenient truth about the homely heater

14 David McWilliams: Why Ireland will recover faster than others

16 Matt Williams: Offloading skill has been obliterated from this Ireland attack

18 Covid-19: Self-isolation rules to be eased for healthcare workers

21 ‘We can’t just dump our rubbish in the gorden. It’s the Vico Road – there’ll be meetings’

22 Cliff Taylor: Finding an Irish solution to our Covid-19 problem

25 Michael Walker: Why Marcelo Bielsa is manager of the season so far

30 Q&A: What are the new coronavirus variants and should we be worried?

31 Kate Winslet: ‘I shouldn’t have worked with Woody. I’ll always grapple with that regret’

35 Focused Social Democrats could face defining decision at next election

40 Deaths of three brothers near Mitchelstown investigated by gardaí