Kathy Sheridan: Perspectives on what's been a poxy decade 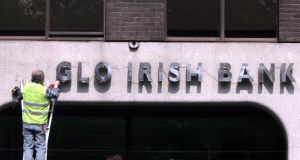 “A frequently-cited hope in the financial meltdown was that a kinder, more contemplative spirit would emerge among all the folk who had slightly lost their way in the gold rush.” Photograph: Bryan O’Brien

This is not just the end of a year, it is the end of a decade. You may join me in declaring a pox on the past 10 years, for a pox it has been. We also declare a pox on all who violate this merciful Christmas break with the silly, tiresome hold-me-coat bluster of a phoney election war. It will be real soon enough.

As will the reopening of hostilities between Brexit and Brussels. As will the surreal US presidential election fandango where the sniffing, slurring, bleating leader of the free world just tweeted that the House of Representatives speaker’s teeth are falling out of her mouth. Condolences to our American friends who nearly 10 years ago stood on the Mall on a freezing DC morning watching Barack Obama’s inauguration with a speech calling for “a new era of responsibility”. Those of us foreigners lucky to be there near swooned with envy.

We had no Obama-like figure then, not even an hint of one. We still don’t. But perspective is the key to happiness and so is our Christmas keynote. In short, the big gift for Christmas in 2019 Ireland is the fact that it’s not Christmas 10 years ago. For those whose memories are mercifully short or who managed to swerve the crash with massive cash reserves (transferred to the spouse) or buried in some handy offshore ventures (in which case a pox on you too), here’s a quick reprise of 2009’s greatest hits.

Savage budgets, the nationalisation of Anglo Irish Bank, the ignominious exit of five bank chairmen, the financial regulator’s retirement with a gold-plated pension, the live register nearly doubling in a year. Huge pension levies, mass protests, disastrous floods, a killer swine flu and the return of mass emigration. All underlined by a state of existential terror and rage, since the people who had made the mess were also still in charge of fixing it.

It was also a year when a former government press secretary got two years for corruption and a ceann comhairle resigned over revelations that as arts, sport and tourism minister he had splashed €200,000 worth of expenses in a couple of years. This made us feel even sillier.

Then along came Thierry Henry and his infamous double handball. This ensured France’s progress to the 2010 world cup at our expense. The loss to national morale was incalculable though some of us drew the line at the Irish fans’ protesting outside the French embassy and demands for a replay because it made us sound even more sillier.

But here’s the perspective bit. Ten years on, it’s possible to perceive handball Henry as a useful repository of displaced rage, a dose of much-needed national therapy. No cow died from the Henry’s handball. And who would have predicted the revelation six years later (on a Ray D’Arcy show, naturally) that the famously honest, shrinking violet Sepp Blatter would just hand €5 million to John Delaney’s FAI , for fear of being sued by the Irish or because he fancied Delaney’s girlfriend or something? Handball Henry was a boon for the nation. We just failed to see it then.

Back then a frequently-cited hope in the financial meltdown was that a kinder, more contemplative spirit would emerge among all the folk who had slightly lost their way in the gold rush (excluding bankers, developers and the political classes, of course). Hopes were nurtured of a return to gentler times filled with perspective, the kind when people appreciated their simple food and non-Jacuzzi shelter and discussed real ideas at spaghetti Bolognese parties lit by candles stuck into empty Mateus Rosé bottles.

Then again, they had probably never experienced the giddy highs of flying by helicopter to the Galway Races (when Ireland briefly held the world record for the highest helicopter ownership per head) or waved the Sweet 16 birthday girl (remember the television series’s Irish episode?) off to her birthday party in a Hummer or had a stunningly pristine 4x4 parked up in a suburban driveway.

Forget that now. The 2019 Christmas message is a positive one. The losers of the early noughties may be winning at last. Flashy consumerism and conspicuous spending have never quite returned to fashion. On one side, Greta Thunberg is standing with a raised eyebrow and a red bucket for a toilet on a carbon-neutral yacht. On the other are indicators that even the purveyors of obscene wealth and inequality may be shifting towards the light, if only for self-preservation.

In recent weeks, two of Britain’s biggest fund-management bosses have called for a rethink of capitalism and its obsession with GDP growth, the primacy of shareholders and the need for decisive government action on climate change. The Financial Times has devoted a whole cover to the words “Capitalism. Time for Reset”. The world’s most aggressive tax avoiders and evaders are being slowly tackled by the European Union and dogged journalism. There are fewer hiding places. This is progress.

In our own small realm, let’s not forget Johan Thijs, head of KBC Bank Ireland’s parent and number eight in the 2019 CEO 100 in the Harvard Business Review. The scornful public response to his master-of-the-universe schtick to the Central Bank – “Come on, guys, turn the page on all that tracker mortgage stuff” – should ensure that no one tries that trick again for a while.

Ten years on, there is still a lot to fix. But if feels like we’re gaining a foothold. May your Christmas break be a haven of perspective.

1 At least eight shot dead in German town of Hanau
2 A Russian cruiser with ‘cannibal rats’: What other ‘ghost ships’ could be out there?
3 Person claiming to represent ‘ghost ship’ owner comes forward
4 DUP pleads with UK to reduce salary threshold for migrant workers coming to North
5 I’m worried about my neighbour’s new ‘shed’ and what he intends to use it for
Real news has value SUBSCRIBE