Following a personal statement made by Gerry Adams in the Dáil regarding the murder of prison officer Brian Stack, Fine Gael TD Alan Farrell names two Sinn Féin TDs alleged to have withheld information about the killing. Video: Oireachtas TV 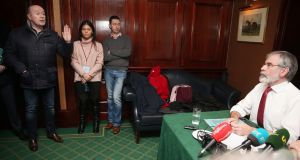 Austin Stack, whose father Brian was killed by the Provisional IRA in 1983, said last week he was “quite confident” he knew the identity of the “individual” to whom Gerry Adams introduced him three years ago and who had information about the murder. He said he had informed the Garda who this person was.

He went on in an RTÉ Prime Time interview to say he expected Adams would be “man enough” to go to the Garda station in Dundalk and tell gardaí the same information, that is who this “individual” was.

8 ‘I’m a man in my 30s and I lack any strong, platonic friendships’

9 Kathy Sheridan: What was the purpose of Brian Stanley’s tweet glorifying mass killings?

10 Róisín Ingle: How are you? Three little words that hold more weight than ever

11 ‘It has to stop’: Republican Georgia election official lashes out at Trump

13 Repairs to defective apartments could cost more than €1bn

15 Michael McDowell: Time to wake up and smell the coffee over Sinn Féin

19 Will income taxes have to rise to pay for Covid-19 crisis?

25 Cultured meat is approved for sale in world first

28 Netflix: 10 of the best new shows and films to watch in December

29 Kia’s spacious Sorento is like a sittingroom on wheels

34 Alleged ‘bribery for pardon’ scheme at White House under investigation

36 Kevin McStay: Beautiful chaos of All-Ireland to end in a Dublin-Mayo final

38 Fintan O’Toole: How does defence of trans rights become search for women to blame?