Fintan O’Toole: Still no shame in helping yourself to other people’s money 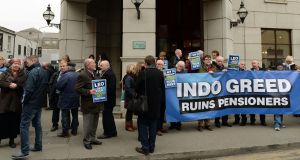 Protest about Independent Newspapers pensions: three things that might change the culture of taking other people’s money are a sense of shame, powerful regulation and serious punishment. Photograph: Eric Luke

Before the great crash of 2008, there were four reasons not to be too worried if you were doing funny stuff with other people’s money. There was no shame in it. It probably wasn’t illegal. Even if it was, you probably wouldn’t be prosecuted. And even if you were prosecuted, the law would slap your wrist with babysoft satin. We know where this culture leads us – and yet it is still thriving.

As for shame, apply the Philip Green test. Green sold the BHS retail chain in the UK for £1 after he and his family had sucked out more than £580 million (€690.6m). He left the company’s pension fund, which had been in surplus, with a black hole of £571 million. Green became an object of deep revulsion, not just among the impoverished pensioners and redundant workers he left behind, but in the business and political establishments. He had gone too far. The House of Commons voted to take away his knighthood. MPs called him a “billionaire spiv” and the perpetrator of “systematic plunder”. Theresa May called out his “corporate irresponsibility and reckless behaviour”. And the UK’s pensions regulator began enforcement action to try to make him fill the hole in the pension fund.

Sense of moral revulsion is muted

Now, what if Philip Green were an Irish business person? A few left-wing TDs and trade union leaders would have shouted and protested. But mainstream, deep-seated establishment opinion? It would have expressed itself, as the Taoiseach did in June when the Natrium consortium engineered a takeover of Clerys that left its long-serving workforce out on the street with nothing but statutory redundancy payments. “The symbolism of Clerys and how long it’s been there and the way this was done – it certainly could have been handled a lot better. It was, in my view, very insensitive.” Philip Green would have been told that he could have handled things a lot better and asked to be a bit more sensitive next time he tips a workforce into poverty.

Or consider the extraordinary goings-on at Independent News and Media, where the expected pensions of retirees are being slashed, in effect to enable €24 million to be added to INM’s balance sheet and paid out in dividends. The descendants of William Martin Murphy call the behaviour of INM “disgusting” but beyond those directly affected and their union leaders, the sense of moral revulsion is muted.

The plaintive cry of the former business writer for The Sunday Independent, Martin Fitzpatrick – “Is there no morality left?” – is a purely rhetorical question. When the subject came up in the Dáil, Enda Kenny summoned all his moral fervour and muttered, “Pensions scheme operations are a matter for the trustees of the particular scheme.” IBEC has said nothing to distance the Irish business community from this behaviour. Has Irish capitalism no unacceptable face?

And if there’s no shame, there’s not much law either. The smart manoeuvres at Clerys and INM, as is the case with Green, are perfectly legal. Irish pension law seems to have been written by the satanist Aleister Crowley: “Do what thou wilt is the whole of the law.”

But even when there are laws, and they are clearly broken, what harm if you get caught? In October, in a case that the pensions regulator risibly proclaimed as a dire warning to “all employers and company directors”, two company directors, Liam and Edward Rice, were convicted in Cork district court of taking pension contributions from employees but failing to pass the money to their pension scheme. This was described by the pensions authority as a “very serious offence”. The two directors and the company itself were each fined €1,750, with €300 in costs – a terrifying total of €5,550. At the end of the law’s long arm, there is a feather duster – provided you rob people (as Woody Guthrie put it) with a fountain pen rather than a six gun.

And that’s when there are actual prosecutions. Consider the still unfolding story of the systematic ripping off of householders by Irish banks who conned them into moving from tracker mortgages to mortgages with much higher interest rates. From the Central Bank’s press release on the first of these cases, we know that the average that was effectively stolen from these customers was €19,351 and that some of them suffered horrendous financial stress and even the loss of their homes.

The banks who did this will be fined and since many of these banks are owned by us, we will effectively pay the fines to ourselves. But where is the individual accountability for these systematic thefts? Somebody devised these schemes and ordered staff to cheat customers. There is not the slightest suggestion that any of these people should be prosecuted.

We got into a very deep crisis in part because of immorality and impunity. We had a culture in which “moral obligation” was a contradiction in terms and legal obligations were optional. The three things that might change that culture are a sense of shame, powerful regulation and serious punishment. And not one of them has taken root in post-Celtic Tiger Ireland. We don’t do outrage; it is perfectly legal to take other people’s money; and even when it’s not, sure what matter?