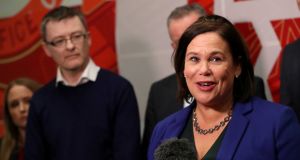 Sinn Féin leader Mary Lou McDonald addresses the media in Dublin on Monday as the party’s TD for Waterford David Cullinane, who shouted “Up the Republic. Up the Ra. Tiocfaidh ár lá” at the end of his victory speech, looks on. Photograph: Niall Carson/PA Wire

About a year ago, Sinn Féin sent one of its senior Belfast members to find out what was happening in Derry. There was unrest in the Foyle constituency. The party had performed badly at council elections and there was discontent at local level. Colm Eastwood, the leader of the SDLP, was likely to take back John Hume’s seat. What no one saw was the thrashing that Sinn Féin would take in the Westminster election. Eastwood got more than double the vote of the sitting Sinn Féin member.

The beating that Sinn Féin took in Derry may have been a godsend for the party. That result, more than any other, removed any uncertainty in Sinn Féin’s mind about going back into government with the DUP. That in turn made it easier to sell its proposals on housing, pensions and health in the south; Irish people are generally unhappy when Stormont is not up and running. They see power-sharing as the core of the Belfast Agreement and, more importantly, of the peace process.

How Sinn Féin, in the light of its success, presents and deports itself to the unionist community will be a measurement of its maturity as a party aspiring to govern

The amazing result that Sinn Féin has just enjoyed demands a fresh look at the party’s overarching strategy and its ability to deliver it. As weariness of violence and political deadlock grew, the party proposed (mostly to its own supporters) an alternative to violence and “the long war”. It was to get the party into government both north and south of the Border. From that position of power and strength, the push for a united Ireland would be high on the agenda. The British government and the unionists would no longer be able to ignore or delay the movement towards unity.

The magnitude of the Sinn Féin vote and the reality that it will now be negotiating the future government of Ireland will send shivers down the spine of unionism. Some will interpret it as a confirmation of what they always thought; that republicans and nationalists are not to be trusted. That there was more sympathy and support for the actions of the IRA than was admitted and that unionists’ culture and political allegiances are under mortal threat. Calmer heads will see the result as a continuation and a broadening of the socially-based issues already played out in the referendums on gay marriage and abortion. They will see that the right to a house and good healthcare played a greater part in the election than political unity.

Which one of these attitudes and voices becomes dominant in the coming weeks and months will be of interest. How Sinn Féin, in the light of its success, presents and deports itself to the unionist community will be a measurement of its maturity as a party aspiring to govern. Martin McGuinness used to advise that a touch of charm went a long way in politics.

'Up the Ra' event transcript

Sinn Féin has tasted success before. It supplanted the SDLP and became the dominant voice of nationalism in the North. The electoral success, however, did not result in reputational success. Sinn Féin is still not considered an effective and dynamic party of government. Since the Belfast Agreement, it has held ministries in all the larger government departments except justice. Few would award it a high score in transforming the economy, health or education.

Despite the party’s years at the centre of power, all the worst indicators of poverty and ill health are to be found in working-class republican and nationalist areas. The west of Northern Ireland would still maintain that all the best jobs and infrastructure go to greater Belfast and the east of the province. Derry used to blame unionist governments for being the only city in Ireland without a university. It is now more likely to point the finger at Sinn Féin. But even west Belfast, the heartland of Gerry Adams and many other prominent republican leaders, has not improved greatly after more than a decade of Sinn Féin governance.

To their great annoyance, the party has often been described as economically illiterate. Adams and McGuinness were neither trained nor exposed to economic realities. Pearse Doherty eventually came through the ranks and established a reputation in this area, but he had limited exposure in the North. Instead of inviting or buying in expertise, the party surrounded itself with its own people who were equally inexperienced in those disciplines.

That culture of keeping everything within the family – courteous and respectful to outsiders but only fully trusting its own people – has served the party poorly. It is partly the reason why some believe that Sinn Féin is under the influence and direction of some unofficial army council and that this has prevented the party from engaging the expertise and the insight of people who may semi-agree or even disagree with its core policies.

The broad nationalist population of the North has had little choice but to be patient of the slow but inevitable mutation of the IRA into the constitutional party that is Sinn Féin. There used to be a quip that the Irish people would give the IRA anything but the vote. The reality now is that a great number of Irish people, north and south, will give Sinn Féin the vote but the quid pro quo is that the transformation is total and complete. Up the Ra has become No more Ra and that is the way it must stay.

Ironically, the dissident IRA will feel the impact of this election most. The Sinn Féin strategy of moving into politics and seeking a place in government in the North and the Republic is reaping enough success to expose how morally vacuous and militarily pathetic is the continuing campaign of the dissident IRA.