No hashtags and street protests over abuse of children in care 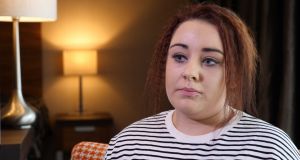 In 2005 at just eight Rachel Barry was sent to a foster home in Dunmore, Co Galway, for monthly respite care. There she was repeatedly raped by Keith Burke. Photograph: still from RTÉ Investigates: Fostered and Failed

Do we really care about children in the care of the State? And by “we”, I don’t mean Tusla, the Child and Family Agency, or any other State service. I mean the rest of us – Irish society.

We know that individual social workers try to do their best. In many cases, they do very well. But more often than we would like, things go badly wrong for children in care.

It is little more than a year since the publication of the reports into the “Grace” case, concerning an intellectually disabled young woman who suffered abuse and neglect over a prolonged period in a foster care placement. Last week we saw young women courageously waive their anonymity and speak out on RTÉ Prime Time about a litany of rape and sexual abuse perpetrated on them while in a foster home.

Most shockingly, even after one of them spoke out and the Health Service Executive had found the complaint to be “credible”, it was decided that two other foster children should not be removed from the home. Instead, the unworkable and entirely inadequate solution was that the foster parents agreed that the children would not be left alone with the accused, Keith Burke.

Burke was eventually charged with more than 70 counts of rape and buggery on three girls and convicted of 23 sample charges.

Shockingly, even after one of them spoke out and the Health Service Executive had found the complaint to be “credible”, it was decided that two other foster children should not be removed from the home

The 2014 judgment of the European Court of Human Rights in the Louise O’Keeffe case clearly established that where there exists a risk of sexual abuse, and the State is aware of that risk, it is obliged to take protective measures to prevent that risk from becoming a reality. It seems obvious that this obligation was not discharged in this case.

Why is this sort of thing allowed to happen, over and over? Of course, social services must shoulder much of the blame , and there should be accountability. But why do the rest of us tolerate it?

Individuals might not be able to exert much influence; but when we care enough about something, then collectively, we can bring about change.

There is an obvious contrast to be drawn between the public reaction to this case (some brief expressions of horror, followed by a return to business-as-usual) and the reaction to the recent trial for rape of two Ulster rugby players, who were both acquitted.

There were outpourings on social media and multiple street demonstrations, which resulted in contracts being revoked and a review being launched of our laws on sexual offences. It has fed into a national conversation on sexual consent.

It may even have helped to create the conditions in which the young women abused by Keith Burke felt able to come forward and tell their stories on camera. There were multiple victims, all of whom were children as young as six. The rapes were repeated and sadistic.

And yet the case is not trending on Twitter. There will be no hashtags and no street protests. The story will disappear from the news cycle in a few days. If this is indicative of our priorities (and if past cases and reports are anything to go by), there will be no change.

There were multiple victims, all of whom were children as young as six. The rapes were repeated and sadistic

Maybe we think that protecting children in foster care is someone else’s responsibility; someone else’s problem. Maybe, as a society, we just don’t care enough to do what is necessary to force a change. Hearing that might make people uncomfortable. Maybe it should.

In Spotlight (the 2015 film that won the Academy Award for best picture for its portrayal of the Boston Globe investigation into sexual abuse in the Catholic Church), one of the characters stated: “If it takes a village to raise a child, it takes a village to abuse them.” Why, as a society, do we seem to be a lot less exercised about accountability in this case than we were about accountability for misogynistic behaviour by rugby players? Why, in our budgets and elections, do we place more priority on tax cuts than on adequately resourcing social services?

Do we simply care less about these children?

This case should be the one to bring about change. But so should the last one, and the one before that. The State apparatus won’t change by itself. We all need to do our part in forcing it to change – both by doing what is needed to support social services in doing their job, and by holding them to account when they fail.

1 Woman stranded in Ireland due to pandemic has ‘miracle baby’
2 When Anthony Clare met ‘calculating, disturbing’ Jimmy Savile
3 Covid-19: Critical cases from NI could put pressure on services in Republic
4 Australia demands answers after women taken from Qatar Airways flight and strip-searched
5 Sacha Baron Cohen: ‘I had to ring the alarm bell and say democracy is in peril’
Real news has value SUBSCRIBE