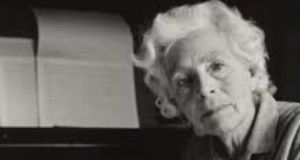 Although she spent most of her life in a country where today is known as “Boxing Day”, the composer Elizabeth Maconchy (1907-1994) betrayed her origins and national sympathies with a choral work she wrote once called “On Stephenses Day”, minus the apostrophe and complete with the redundant syllable.

Like much of her work, it was inspired by an Irish theme, in this case the old song that goes: “The wren, the wren, the king of all birds,/On Stephen(’)s(es) Day was caught in the furze”.

You can still occasionally hear her piece sung by the BBC Singers and others, the extra syllable included, which is a minor cultural institution in Ireland.

Born in England of Irish parents, she has been described there as “one of the finest composers the British Isles have produced”. But on this isle at least, she seems little remembered now, although her best works also include on based on Louis McNeice’s poem, Prayer before Birth, and – perhaps most remarkably – the music for a ballet called Puck Fair.

Set in Killorglin during the August festival, the ballet dramatises the love story between a “tinker boy” and a local girl, as the horrified townsfolk and a sinister “Black Coated Gentleman” (the priest) try to break up the romance. It was performed at The Gate during the war, and a few other places since.

In a 1977 interview with this newspaper, for her 70th birthday, Maconchy recalled her struggles as a pioneering female composer in 1930s Britain. She also had fond memories of a childhood in Ireland, after her parents moved back when she was 12.

Her Dublin home, although by then reduced from former glory, was itself remarkable. Santry Court had once been one of the greatest and most beautiful mansions in Ireland. Its road to ruin began in 1738 when the then owner, Lord Santry, a member of the Hellfire Club and thoroughgoing rake, ran his sword through a footman, who weeks later, as one account puts it, “inconveniently died”.

The killer’s money (and his uncle’s control of the city water supply) kept him out of jail, but he was nevertheless ruined.  So, eventually, was the house. After the bankruptcy of a 19th-century incumbent, the fading mansion devolved into the stewardship of a Captain Poe, as agent-in-residence.

The Poes were Maconchy’s mother’s family, hence her time in the house which, being strategically located near Dublin airport, was later acquired by the Free State, for military use, until it burned down in 1947. Today, it’s the site of Morton Stadium.

Santry Court may also have enjoyed a literary afterlife as model for the fictional manor of Myles na gCopaleen, late of this newspaper, who hosted famous (if imaginary) parties there, including one that was so good, he put on his coat and hat at one point of the night, thanked the surprised hostess for her hospitality, and caught a taxi home before remembering that he had been at home to start with.

Maconchy’s husband, by the way, was Irish too and well-known in his own right. Born in Bray, William (aka Billy) Le Fanu, became a celebrity librarian in the UK.  More precisely, he was described as “the foremost British medical librarian of his time”. However competitive a field that is, it earned him charge of the Royal College of Surgeons library in London for 40 years.

His publications included a catalogue of Jonathan Swift’s library and a “bio-bibliography” of vaccine pioneer Edward Jenner. But he was also a war hero of sorts. Before the RCS was destroyed during the London blitz, he had evacuated the books. He worked as an air-raid warden for a time and organised the supply of reading material to army and navy hospitals.

He and Maconchy were a devoted couple. He was happy to have made it into Who’s Who as her husband, rather than the more traditional order. He died in 1995, only a few months after she did, and one of his last acts was to thank RTÉ for making her a composer of the week.

Proudly Irish, Le Fanu also treasured his French protestant ancestry and was prominent in the Huguenot Society. Which reminds me (on Stephenses Day) of another quirk of Irish linguistics, drawn to my attention recently by reader Cian Flaherty.

It seems that on the inscription over the gate of the Huguenot cemetery at Merrion Row, the word is spelt “Hughenot”. Cian is not sure whether that is an old but legitimate variant, or a typo by the stonemason. And nor am I. But if the extra “h” is a mistake, another vexed Anglo-Irish question arises: is it pronounced “haitch” or “aitch”?