Going Native: A Kerryman who became a Native American hero 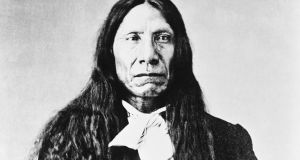 Years later, Red Cloud (above) at least recanted some his criticisms, recalling McGillycuddy as a “young man with an old man’s head”, who had been proved right in many things. Image: Getty Images

McGillycuddy’s Reeks you will have heard of; McGillycuddy’s Peak you probably won’t. But despite being in faraway South Dakota, among the Black Hills, the peak also has strong links with Co Kerry, via the man for whom it was named.

His life is worth recalling in the week US president-elect Joe Biden nominated a first-ever Native American as a cabinet secretary, because in the sorry history of relations between the white man and the indigenous populations of the US, Valentine Trant McGillycuddy seems to have been one of the good guys.

He was born in Wisconsin on February 14th, 1849, but he was from Co Kerry on both sides. His father was a Daniel McGillycuddy, late of Tralee, his mother Joana Trant from the end of the Iveragh Peninsula, at Portmagee.

The two met on the crossing to America. She was Catholic, he was Protestant. But subverting historical stereotypes, she was the one with some money and influence, including a letter of introduction from her relative, Daniel O’Connell, intended for the Catholic archbishop of New York.

In the event, they bypassed New York and headed west. He became a medical student and practised as a doctor for a time. Then, doubling as medic and topographer, he headed for the wilds, volunteering for an expedition of surveyors fixing the borders between the US and Canada.

In the 1870s he was a surgeon at several battles in the “Indian wars”. In the process, he grew to sympathise with the plight of the indigenous tribes, and when posted to a fort near South Dakota’s Pine Ridge reservation, he became known as a “friend of Crazy Horse”, the Lakota chief and victor of Little Bighorn, by then a prisoner there.

McGillycuddy was close by when Crazy Horse was killed, in still-disputed circumstances. He ministered to the dying man’s wounds and later lobbied Washington for better treatment of the native minority. In 1879, he was appointed Indian agent – official liaison between government and tribes – at Pine Ridge, and had more strained relations with another Lakota leader, Red Cloud. His four years in the post were in general controversial, with newspaper allegations that he was part of the “Indian Ring”, misappropriating federal funds.

But years later, Red Cloud at least recanted some his criticisms, recalling McGillycuddy as a “young man with an old man’s head”, who had been proved right in many things.

McGillycuddy merits two mentions in the book Bury My Heart at Wounded Knee: Dee Brown’s elegiac history of the American Indians. In one, after a treaty in which the Sioux signed over yet more of their native territory, he was on the receiving end of a bitter gesture by a minor chief called Yellow Hair.

The latter picked up a clump of earth, rolled in into a ball, and presented it to the agent. “We have given up nearly all of our land,” he told him, “you had better take the balance now”.

The other was a prelude to the climactic tragedy of Brown’s book, 130 years ago this month. Its context was a millennial movement, the Ghost Dance, which involved tribes gathering in large numbers and dancing to invoke the prophesies of a messiah who had predicted peace, prosperity, and an end to white expansion.

The crowds made the army nervous, and a build-up of troops did likewise to the ghost dancers. McGillycuddy thought the soldiers were overreacting and likened the dancing to white religious movements: “If the Seventh Day Adventists prepare their robes for the second coming of the Saviour, the United States army is not put in motion to prevent them. Why should not the Indians have the same privilege? If the troops remain, trouble is sure to come.”

He was right. On December 15th 1890, Chief Sitting Bull was killed in a skirmish between ghost dancers and police. And just after Christmas, an attempt by soldiers to disarm an Indian camp at nearby Wounded Knee Creek turned into a massacre, in which 25 soldiers but about 10 times that number of Lakota men, women, and children were killed. It was the Native Americans’ last stand.

Despite his age in 1917, when US joined the first world war, McGillycuddy volunteered for army service. He was not accepted and instead served on a different western front, Alaska, fighting the Spanish flu pandemic. He died in 1939, aged 90. His ashes were buried on Black Elk Peak, the highest point of the Black Hills, which he had once climbed, and where an inscription in the Lakota language now describes him as a “Holy White Man”.