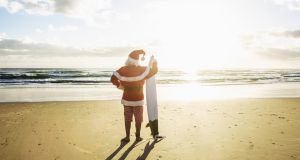 I spent Christmas in a sweltering Perth, more than 30 years ago, during a 12-month tour of Australia. Photograph: Getty Images

The only Christmas I have ever spent abroad was in a sweltering Perth, more than 30 years ago, during a 12-month tour of Australia. At least it was supposed to be a tour. But since my flight into Perth in October (the cheapest option from Ireland, although a whopping £1,200 back then), it had been all work and no touring.

Perth was a nice place to settle and have a family. If you were 20-something and single, it was a bit quiet. I had finally booked a Greyhound bus to Adelaide for St Stephen’s Day, and looked forward to escaping. But first I had to break the news to my employer, and in the run-up to Christmas I had not yet found a way to do this.

He was a builder from Armagh, and “employer” was overstating things from my point of view. I’d been with him only a few weeks and never intended staying.

But I needed the money, badly, after a spell as a door-to-door vacuum cleaner salesman, which had been more educational than remunerative. So although I didn’t lie about anything, I may have been guilty of not correcting his initial presumption that I’d be around for longer than Christmas.

Mentions of my 12-month tour never seemed to register in our conversations. For him, Australia was where you started a new life, nothing less frivolous. And what sane person would think of going back to 1980s Ireland?

Also, we had bonded quickly, as fellow Border men, and I suspect he was starting to see me as the son he didn’t have.  He certainly had longer-term plans. Surveying my weedy frame on one occasion, he said: “We must get you into a gym after Christmas.” He also mentioned me joining the GAA club.

Building was hard work, especially in an Australian summer with temperatures in the mid-30s. We had to finish every day by 2pm. And I never started at 6am, like the others. For the first week, I was under the impression that the earliest train could only get me there by 6.45. The boss accepted this reluctantly.

Then I discovered there was an earlier, crack-of-dawn departure but decided – God forgive me – against mentioning it. As it was, at his advice, I had to take salt tablets every morning to avoid dehydration. By afternoon, as I invariably slept on the train home, the salt had reassembled itself into Rorshach-test patterns on the outside of my T-shirt.

The other quasi-medical tip he gave me, meanwhile, concerned the dangers of “going tropical”. This involved excessive beer consumption, climate-induced, to which others of his crew had succumbed. The first time we went drinking together, I had one beer for every two they had and, even then, threw up afterwards.

I still hadn’t broken my travel news when the boss invited me to his house for Christmas dinner. This, finally, was where I was would have to tell him. But somehow, again, the moment never came. I was being treated as part of the family, with his wife and daughter, which only made my imminent defection sound worse, no matter how I rehearsed it mentally.

His wife was more nostalgic about Ireland that he was. She wanted to learn Irish and, on her prompting, I recalled some of the words of Oíche Chiúin, which she thought beautiful, although it also made her sad.

After dinner we drank beer out the back, to the calming soundtrack of insects hitting the ultra-violet mozzie zapper. A former employee, also Irish, who had since struck out on his own, dropped in. Back home, he had been a Traveller. Now he was looking for the name of a good accountant. He was the Australian Dream personified.

The builder mentioned the New Year again and, for the umpteenth time, I thought, tell him now. But my resolution fizzled out, like another fried mosquito. Later, I had to dissuade him from calling me a taxi. “I’ll get one on the street,” I lied. My fragile budget didn’t extend to taxis. I walked the few miles home instead, working on another new plan for confession. It would have to be by phone now.

I rang from a callbox on Stephen’s Day evening, but he was out at the GAA club. So I told his daughter a version of the truth, except that this one involved the sudden offer by someone of a car-share to Melbourne, which had been too good to refuse.

I also posted my boss an apologetic card, embellishing the story.

Then I made my post-Christmas flight into Egypt, accompanied by guilt rather than King Herod on a 36-hour bus trip across the desert.