Christmas waits for a revival? Frank McNally on a controversial tradition

In their classic format, ‘waits’ were small groups, suited to a pandemic 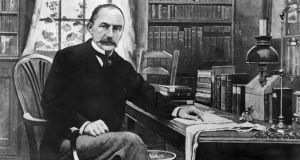 The last verse reveals it isn’t just the beauty of the waits’ music that has moved the lady of the manor. Instead, Thomas Hardy concludes: “She had learnt (we heard when homing)/That her roving spouse was dead;/Why she had danced in the gloaming/We thought, but never said.” Photograph: Hulton Archive/Getty Images

In subject matter if not in spirit, Thomas Hardy’s Seen by the Waits is a classic Christmas poem. The “waits” referred to were travelling musicians who used at this time of year perform seasonal music under people’s bedroom windows, often late at night: a charming custom that, to modern ears, sounds like harassment.

But it was a centuries-old tradition in these islands, and it explains the invasion of privacy described in Hardy’s opening verse, viz: “Through snowy woods and shady/We went to play a tune/To the lonely manor-lady/By the light of the Christmas moon.”

The poem’s second and third verses go on to describe how the waits serenade this lonely lady beneath her boudoir window, from which she thinks she is invisible to them. A carelessly placed mirror, however, turns them into voyeurs. They see that she is dancing, alone, “thin-draped in her robe of night”, and are mesmerised.

Then comes the twist. The last verse reveals it isn’t just the beauty of the waits’ music that has moved her. Instead, Hardy concludes: “She had learnt (we heard when homing)/That her roving spouse was dead;/Why she had danced in the gloaming/We thought, but never said.”

That cynical turn of events mirrors, in a way, the fate of the waits tradition itself. There had been a time when the musicians involved were considered spiritual descendants of the choirs of angels that attended the first nativity. Then, somewhere down the centuries, they became a public nuisance.

In between, during the middle ages and later, waits in general were municipal watchmen who marked the hours of night by blowing a horn or playing a tune. These evolved into uniformed bands, performing at civic events and at Christmas. But when such jobs were abolished, the Christmas Waits turned into mere freelance carollers, much like the ones that (in a normal year) you see in Grafton Street.

Except that – contrary to the name – they didn’t wait for audiences to come to them, they brought their music to people’s homes. And this was not always welcome, either for its quality, which was variable, or the late hour at which it tended to be performed.

Here’s George Bernard Shaw complaining about it, in 1889: “The only music I have heard this week is waits; to sit up working until two or three in the morning, and then, just as I am [falling asleep] to hear Venite Adoremus welling forth from a cornet English pitch, a saxhorn Society of Arts pitch, and a trombone French pitch is the sort of thing that […]destroys my goodwill towards men.”

Shaw was being relatively restrained. Around that time, another London resident, Jerome K Jerome, wrote of experiencing an urge to “injure” the waits playing under his flat in Chelsea. He tried throwing coal but hit only “the man at [number] Eighty- eight, an Irish gentleman, a journalist like myself, who had gone out to complain.”

The tradition had entered its decadent phase by then, clearly. And I presume today, it is at least as dead as the manor lady’s husband. But then again, reports of its demise have been exaggerated before.

A Christmas 1884 letter to the Nationalist and Leinster Times, for example, responding to a claim that the custom was “extinct” in Ireland, protested otherwise: “I hereby take leave to inform [you] that, in Carlow at least, our “Waits” dutifully perform the time-honoured ceremony…”

And 40 years later, in 1923, a columnist with the Irish Independent, wrote this: “The other night, walking home along the Clontarf shore, I heard at Castle Avenue, the first of the Christmas ‘Waits’ [and wondered], with the full tide lapping against the sea wall, why some musical people shrug their shoulders over these carollers because their singing is not of the supreme excellence that it might be…”

More recently, the archives suggest localised holdouts for the custom even in the later years of the 20th century. For unexplained reasons, Mayo features prominently. A 1968 edition of the Mayo News mentions a revival of the “Waits of Swinford”, while as recently as 1997, the Connacht Telegraph reported waits in Castlebar.

In their classic format, they were small groups, typically trios. And welcoming or not, their audiences were similarly intimate, one household at a time. Add the fact that the performances were socially distanced – at least two metres below the average bedroom window – and they would seem oddly well suited to a time of pandemic. So who knows, perhaps Christmas 2020 will see another revival. If Mayo win the All-Ireland this weekend, that’s where it may start.