The Irish childcare model is broken

Ireland does not have to reinvent the wheel; other countries have adequately addressed these issues 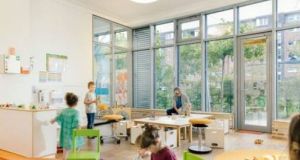 Pobal, the not-for-profit company that manages social programmes for the Government, released a report before Christmas that confirms the threefold crisis in Irish childcare.

First, childcare fees are becoming ever more unaffordable. Fees for full-time childcare exceed €184 per week with Dublin and surrounding counties averaging over €200 per week. Fees have risen by 10 percent over the last three years. Part-time fees rose by eight percent last year alone, to €110 per week.

To put this affordability crisis in perspective, the cost of childcare in other EU countries is substantially less. In Finland, Denmark, Belgium and France, weekly full-time fees range between €60 and €70 per week with Sweden as low as €30 – far less than Irish part-time fees.

Second, there is a pay crisis in the childcare sector. There over 25,000 employed in the early years sector. Average pay for most workers is less than €12 per hour. 60 percent earn below the Living Wage with many earning only marginally above the minimum wage.

Many childcare workers are trapped in precarious contracts, forced to work part-time when they want to make a full-time living from their work. Low pay and precariousness are the defining features of our childcare sector.

Over a third of providers are unable to recruit employees with half unable to retain staff.

The third crisis flows from the second – the unsustainability of the sector. The staff turnover rate in full-time only care is over 40 percent. This undermines quality and consistency of care in the sector. In a SIPTU survey of early years professionals, two-thirds of employees stated they would not be working in the sector if things don’t change, while over 40 percent are actively seeking other work.

Early Childhood Ireland reports that providers are facing into a staffing crisis. Over a third of providers are unable to recruit employees with half unable to retain staff. A growing number are advertising for staff from overseas. There is a real question mark over the medium-term viability of childcare provision.

However, increasing spending is not sufficient. The current model of childcare is broken. Throwing more money into the model is not a solution since the twin goals of affordable childcare, and professional pay and working conditions are opposed to one another.

This can be seen in the almost impossible situation that providers are put in. If they want to retain staff, pay decent wages, and attract people into the sector on a sustainable basis they will have to raise fees, thus undermining affordability. If they want to reduce fees they will have to restrain payroll costs and squeeze labour since this make up over 70 percent of a provider’s budget, thus undermining professionalisation.

To overcome this, to ensure the goals of affordability and pay professionalisation work with rather than against each other, we need to see childcare as a community service based on a public service model. Anything less will merely exacerbate, not resolve, the crisis.

The Government implicitly accepts this even if they don’t have a ready or worked out alternative. Minister Katherine Zappone has established a panel of international experts to devise a new funding model. This could be a positive step but only if it recognises the trap that providers, workers, parents and households are in.

The interests of parents, workers, providers and children should feature prominently in the upcoming general election debate

Ireland doesn’t have to reinvent the wheel. A number of countries have adequately addressed these issues in the early years sector, ensuring high quality services at affordable costs (in some cases, free services) with an appropriately compensated workforce. Some of these countries even have strong private sector provision just as we have here. However, in these countries fees are controlled while spending is publicly subsidised.

The issue is not whether it can be done – it’s being done every day in other counties. The real issue to what extent we value early years education and care. The interests of parents, workers, providers and, most of all, children should feature prominently in the upcoming general election debate. Very simply, political parties should be asked how they intend to dramatically reduce fees and ensure professional pay levels in the childcare sector. How do they intend to introduce a childcare system that parents enjoy in other European countries?

The time for prevarication is over. Our children deserve better.

Michael Taff is a researcher with SIPTU

1 Taoiseach claims Sinn Féin not ‘a normal political party’
2 52 places to go in 2020: Here’s where the New York Times says you should visit
3 Who are Ireland’s 17 billionaires?
4 Yacht captain guilty of drunk sailing had ‘God given right’ to be on Liffey
5 Over 65s are expected to ‘crawl into corner and die’, says election hopeful Valerie Cox
Real news has value SUBSCRIBE