Syrian aid corridors are under threat

Another 250,000 civilians have been displaced by the latest strikes in country’s conflict 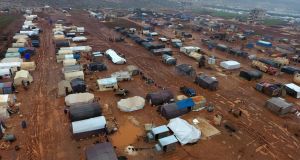 Tents shelter Syrians who fled ongoing battles in the southern and eastern countryside of Idlib province, in a camp for displaced people near Sarmada in northern Idlib. Photograph: Aref Tammawi/AFP

Another devastating chapter in the tragic story of Syria’s protracted and brutal nine-year-long conflict was written over the Christmas period, with fresh bombardments striking horror and panic into the lives of thousands of men, women and children in the country’s northwest.

The impact of the new strikes has resulted in more than 250,000 civilians fleeing from southern regions of Idlib province, according to United Nations reports, with 80 per cent of those displaced being women and children.

On December 20th, as air strikes and ground offensives on several locations in southern Idlib and northern Latakia intensified, negotiations on the renewal of UN Security Council resolution 2449, which has enabled the transfer of humanitarian aid through four border crossings with Turkey, Jordan and Iraq since 2014, broke down. The resolution was blocked by Russia and China, both of which abstained from the vote during last year’s renewal negotiations at the Security Council.

This year, Russia and China presented an alternative draft that would de-authorise border crossing points in Iraq and Jordan and allow humanitarian access only through two cross-border points in Turkey for a six-month period. The clock is ticking as the new deadline for negotiations to agree on the resolution text is weeks away.

Idlib province, roughly the size of Co Galway, is the last refuge for millions of displaced families. The new wave of attacks on and around the city of Ma’arat al-Numan, (known colloquially as the capital of southern Idlib) represents the latest phase in the recent escalation in conflict that has caused more than a million people to flee their homes between May and December, gathering as many belongings as would fit in small trucks and flee for their lives in temperatures nearing sub-zero.

More than 100,000 people arrived in Goal’s areas of operation in northwest Idlib in the last two weeks due to the new bombardments. They don’t have any fuel for heating or hygiene items. More than 50 per cent reported not having access to water and 93 per cent reported they did not have access to adequate food.

We have responded by deploying six emergency response teams to 21 villages hosting 2,462 households that are in urgent need, providing humanitarian support with cash transfers and ready-to-eat food kits. But the number of new families arriving is increasing daily and the uncertainty around the safety and likelihood of new bombardments creates a further layer of complexity . Our partner, the Big Heart Foundation, also launched a similar response and the needs of the most recent arrivals are still being assessed.

Meanwhile, under treacherous and ever-changing circumstances, the work of our dedicated staff and partners continues. In November, Goal’s team and partners delivered more than 20,000 food-aid kits to 6,000 households, distributed food vouchers to 16,490 families in 96 villages, and reached more than 5,000 households with cash transfers. The local bakeries supported by Goal with flour and yeast have produced more than 2,000kg of bread, for 300,000 people. And every day we support 800,000 households with access to clean water through 64 water stations which need careful maintenance and constant fuel supplies. Our teams are planning to extend pumping hours and are also assessing the potential for the extension of pipelines to include areas with newly-displaced persons.

Goal supported bakeries in Maarat Misrin, where many families are arriving to and passing through en route to other locations as a result of the recent bombardments, have also increased their production of subsidised bread in response to our teams assessment of the movements and the urgent needs of the newly-displaced families.

In the coming weeks our teams will continue to monitor, assess and adapt to the ever-changing needs of people caught in this deadly crisis. It is clear that the needs on the ground will far outweigh the resources available, creating even greater challenges for our workers and partners and all aid agencies working on the front lines.

Not only is it essential that members of the Security Council resume negotiations immediately to renew resolution 2449 to maintain the life-saving humanitarian corridors into Syria – it is equally important that a peaceful solution is found for the more than four million people living in Idlib province.

Else Kirk is Goal’s regional director for the Middle East