Most consumers are unaware the salmon they eat is all farmed, as is sea bass and trout 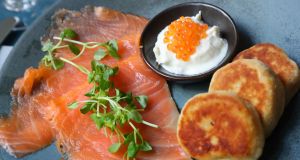 The bulk of salmon in this country, both smoked and fresh, is imported salmon, which is inferior to the Irish organic product. Photograph: Nick Bradshaw

Smoked salmon has become such a staple of the Irish diet in recent decades that when families sat down to their Christmas dinner on Wednesday many had the dish as a starter before going on the traditional main course of turkey and ham.

Very few may have realised they were most likely eating Scottish, Norwegian or even Faroe Islands salmon rather than the Irish variety. This is because that we are not producing anything like the quantity of salmon required to supply the Irish market never mind the potentially huge export market.

Salmon farming is a booming industry worldwide but it has declined in Ireland over the past decade because of a staggering level of official incompetence and scaremongering by small groups of activists who have managed to tarnish the industry’s image with wildly exaggerated claims.

When salmon farming began, nearly three decades ago, Ireland and Norway produced about 20,000 tonnes of fish a year each. Now Norway produces 1.2 million tonnes and Ireland a paltry 19,000 tonnes. Official figures show that while global aquaculture production has grown by 164 per cent since 2000, output here has fallen by 24 per cent in the same period. Ireland has gone from 5 per cent of European aquaculture production 20 years ago to less than 2.5 per cent today.

In 2010 the government policy outlined in “Food Harvest 2020” targeted an increase in aquaculture production to 36,000 tonnes a year by 2020 but by the end of 2018, production had decreased by 7,000 tonnes on 2010 level. At 2017 prices that underperformance amount to a loss of more than €105 million in product value. The cumulative loss to the sector is €570 million over seven years at the prevailing in-year price, and it is estimated the total loss to the economy has been €803 million.

The important point is that coastal communities around Ireland have been deprived of benefiting from a vibrant industry that has the capacity to provide livelihoods and revitalise rural life in some of the most remote areas of the country. The opposite has happened in Norway, where many coastal communities along that country’s 2,650km coastline are thriving.

Unless there is a radical change of heart in the next couple of years by officials in the Department of the Marine, who seem intent on frustrating every effort to develop the aquaculture industry, the prospects for its future will be bleak. Already investment in Ireland has dried up and is going instead to Scotland where the industry is taken seriously by the government there.

The sad part of it is that Irish waters are some of the best in the world for the production of high quality organic salmon, which can fetch premium prices in export markets. Fish farming is one of the most sustainable and climate-friendly ways of producing nutritious food and is going to become increasingly important as the wild stocks of all species are driven close to extinction and people switch from eating meat.

Industry experts calculate that by 2030 about 40 million tonnes of seafood will be required to keep pace with global population growth. At present there is an eight million tonne gap between EU seafood consumption and the sea fisheries catch, so the European Commission is encouraging member states to increase production. It has asked them to simplify their administrative procedures to ensure the development of the aquaculture sector.

A number of applications for salmon farms have been with the department since 2005 and the average wait for approval is eight years. By contrast, the international average is two years. This level of foot dragging is inexplicable unless the department is actively trying to choke off the industry.

There is no doubt that salmon farming has a poor image in this country yet the public is consuming more salmon than ever before. The bulk of it, both smoked and fresh, is imported salmon, which is inferior to the Irish organic product. The negative image of the industry is down to some of the early teething problems, but primarily it is because of the campaign of opposition by angling interests, most of whose objections have been shown to be scientifically baseless.

Most consumers are unaware that the salmon they eat is all farmed, as is sea bass and trout. As the wild stocks of all fish species decline due to overfishing the world will come to rely increasingly on farmed fish of all kinds. The question facing this country is whether we want to give coastal communities a viable path towards sustainable jobs through the production of high quality organic farmed fish or whether we are prepared to let the opportunity slip because of official ineptitude.

1 Dublin gangland figures involved in Drogheda feud that killed 17-year-old
2 Mary Lou has to call for the smelling salts as SF councillor deals a knock-out blow
3 Patrick Freyne: The mystery of Dermot Bannon and his many surrogate wives
4 Who was murdered teenager Keane Mulready-Woods?
5 Murdered and mutilated: Keane Mulready-Woods and the teenagers of gangland
Real news has value SUBSCRIBE