Newton Emerson: Arlene Foster’s leadership of the DUP has been a catastrophe 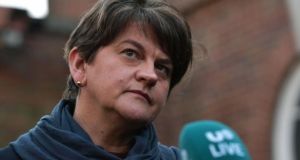 It is hard today to appreciate the complete conceptual change in Northern Ireland politics represented by the 2006 St Andrews Agreement. The preceding Belfast Agreement had sought to build politics from the centre, believing power-sharing led by the Ulster Unionist Party (UUP) and Social Democratic and Labour Party (SDLP) would marginalise the Democratic Unionist Party (DUP) and Sinn Féin.

At St Andrews, the British and Irish governments effectively turned the peace process inside out, giving up on the centre parties and attempting to build politics from the margins. The fact the DUP and Sinn Féin had sabotaged the original vision with bad faith and aggression did not count against them; it only underscored the realpolitik of putting them in charge. If hardliners had broken the system, hardliners would be the key to fixing it.

Some of the rule changes at St Andrews are now blamed for entrenching the DUP and Sinn Féin through a symbolic contest to become the largest party. While that is true, both governments and the electorate went into it with their eyes open. The effect of the rule changes was obvious and there were plenty of contemporary warnings, but the agreement was still considered brave, pragmatic and clever, with Ian Paisley and Martin McGuinness healing the past in the way only Richard Nixon could go to China. Ten years of devolution did follow – five times longer than the UUP and SDLP managed.

All this will be worth remembering in the coming year, as a process that took place between Sinn Féin and the DUP looks set to be repeated within them. Both parties were long presumed to be on a centre-wards trajectory. Both have had cause to believe this is not working, at least for them. They may turn to their hardliners, for want of a better term, to fix the system.

The most obvious sign of this could be a change of DUP leader. Arlene Foster’s leadership has been a catastrophe. For two years, MP Jeffrey Donaldson has been rumoured to be her likeliest successor. Both are former members of the Ulster Unionist Party, seen as on the moderate wing of the DUP. Where Foster failed to carry a liberal agenda, Donaldson might succeed.

However, the DUP’s old guard intends to turn this theory inside out. They believe another ex-UUP leader would only replicate Foster’s weaknesses and repeat her mistakes. Instead, they want a traditional party stalwart, with former Stormont health minister Edwin Poots the frontrunner.

Much of the public will find this incomprehensible, partly because it is the opposite direction they expect and partly because Poots, with his creationist and conservative views, is considered an almost comically backward figure. Yet this is the direction accepted at St Andrews, and by that theory Poots deserves consideration. Like Foster, the IRA tried to murder his father. Unlike Foster, he has demonstrated he can put it behind him. While Foster was setting up the Renewable Heat Incentive scheme, Poots was introducing all-Ireland children’s heart surgery and developing a genuine assembly partnership with Sinn Féin. He helped negotiate the 2018 draft deal to restore devolution, which Foster declined to sell after objections from the Orange Order. Poots is now leading negotiations for another deal. It is entirely rational to believe he would be better at selling it, either by persuading Orangemen of its merits or by telling them to like it or lump it.

Of course, Poots could still alienate vast swathes of the electorate merely by being a religious and social conservative, whatever his success at Stormont.

Sinn Féin is contemplating a similar personnel change. The combined roles of deputy party leader and Stormont leader, held by Michelle O’Neill, are to be split, with former minister Conor Murphy favourite for the Stormont job. O’Neill is 42 and has no paramilitary past. Murphy is an IRA ex-prisoner from the Troubles generation. Although not as dramatic as replacing Foster with Poots, many would see replacing O’Neill with Murphy as a reverse of presumed direction.

Selling a Stormont deal is a major challenge for Sinn Féin, as a vocal part of its base has given up on devolution. In the spirit of St Andrews, Murphy is better equipped to promote an agreement that eluded O’Neill.

This is part of an all-Ireland regrouping by Sinn Féin. Following electoral setbacks in the Republic last year, senior party figures told The Irish Times the leadership of Mary Lou McDonald should not be seen as heralding a move to the centre. “We don’t forget our roots,” one said.

If going back to their roots is what it takes for Sinn Féin and the DUP to return to government, how far can they ever grow beyond them? The margins-in model has its logic but appears to have found its limit, with the combined vote for Sinn Féin and the DUP falling to 52 per cent in December’s UK general election. Should both parties fail again and become a minority, it will be time to revisit the idea of building from the centre out.