The DUP has played hardball and lost 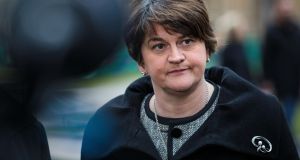 DUP leader Arlene Foster: DUP has focused on technical aspects of the Border, missing the point the EU’s tactics have relegated this topic to mere quibbling. Photograph: Jack Taylor/Getty Images

The European Commission’s draft Brexit legal text, like the collapse of the Stormont talks, represents another failure of the DUP’s much-lauded negotiating skills.

Last December, the party stalled the first round of Brexit discussions and humiliated UK prime minister Theresa May, over a leak suggesting regulatory convergence in the event of a no-deal Brexit would equate to Northern Ireland staying in the EU customs union and single market.

After a week-long staring contest, the DUP was promised “no new regulatory barriers” between Northern Ireland and Britain, plus continued “unfettered access” for Northern Ireland to the UK internal market.

This was added to last December’s joint EU-UK statement, but now Brussels has presented its version of that statement as draft EU law, the promise has disappeared. Commission sources have taken evident delight in explaining this is because the UK’s internal market is about to become entirely the UK’s business – it is taking back control, after all.

The joint statement said this would apply only to “those rules of the internal market and customs union which, now or in the future, support North-South cooperation and protection of the Good Friday [Belfast] Agreement.”

The agreement lists 12 such areas of co-operation, almost all relating to public sector activity – barely relevant to the customs union and single market.

Yet throughout that week in December, Brussels and Dublin kept referring to alignment of the “all-Ireland economy”. Now the draft legal text says this does equate to Northern Ireland staying in the EU customs union and single market in the event of a no-deal Brexit.

So the DUP is back where it started and has been made to look impotent on its constituents’ defining concern. In the eyes of many unionists, the European Commission has just published a “backstop” plan for a de facto united Ireland, which the DUP has already tried and failed to prevent.

Could the DUP, a tiny regional party at odds with its region on Brexit, ever have swayed a continent-wide agenda? It would have had more chance if it had countered the EU’s argument.

Brussels has portrayed Ireland and Brexit, deal or no deal, as an issue of protecting the Belfast Agreement “in all its parts”. Questions about trade, free movement and the nature of the Border are framed not as practicalities but as threats to an international peace treaty.

This is a politically contrived negotiating position, as groundless and irresponsible as anything cooked up by the most extreme Brexiteers.

The Belfast Agreement contains no mention of trade, free movement or the nature of the Border and cites EU membership only in its non-binding preamble. Brexit will not affect one word of its provisions, as found by the UK supreme court – a body still part of the EU judicial system.

The DUP’s status as a pro-Brexit Northern Ireland party would have given it credibility to engage with debate at this level, robustly challenging the notion that the agreement is under threat.

The DUP could have used its leverage in London to press the British government to do likewise, rather than being sucked into the language of “protection”.

There are two unionist MEPs: one DUP and one UUP. They have not made half the noise Sinn Féin has with four.

DUP figures have denounced claims of threats to the peace process but the party remains too ambivalent about the Belfast Agreement to ride proudly to its defence. It would like Stormont back, but devolution is the only part of the settlement it values. The parts most critical to answering its Brexit opponents are the agreement’s North-South structures. These are the parts towards which the DUP is most hostile and it has long worked to actively undermine them. It had six months at Stormont after the EU referendum to make some use of them but did not do so.

Instead, the DUP has focused on technical aspects of the Border, making a good case that these will be manageable, but missing the point that the EU’s tactics have relegated this topic to mere quibbling. In the end, the party has fallen back on defensive unionism, clinging to a British “internal market” promise that Brussels has laughed off as a joke.

The DUP’s handling of the Brexit talks raises a wider question about its negotiating style. There is a lot to admire about the party’s hardball stance at Westminster – traditionally, unionists who found themselves with a seat at the table were patronised and bamboozled before being ejected at the first opportunity.

The DUP knows to get what it can, when it can, however it can. But there still comes a point when you need to know your limitations and maintain relationships. In humiliating May to no avail, the DUP crossed that line, in London and Brussels. The collapse of the Stormont talks suggests it has crossed that line in Belfast as well.