Newton Emerson: ‘Iran on the Bann’ is facing a new social border 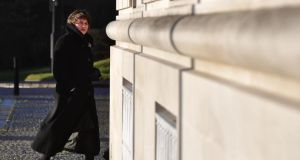 DUP leader Arlene Foster arrives at Stormont earlier this month. This week the party held its first official meeting with campaigners for same-sex marriage. It praised the meeting as “useful” but it did not alter its opposition one iota. File photograph: Charles McQuillan/Getty Images

There may or may not be a significant hardening of the economic border but a new social border in Ireland is about to appear, certainly and imminently.

Northern Ireland is already the only place in the UK and Ireland without same-sex marriage, although it had civil partnerships five years before the Republic and held the first such ceremonies in the UK, so isolation on this point is still sinking in. (Civil partnerships were imposed by British government ministers during a period of direct rule.)

Abortion is another matter. In a few months, Northern Ireland alone in these islands will be on the roster of places where abortion is permitted only to save the mother’s life – a short list of 17 countries, including Afghanistan, Sudan and Guatemala.

Almost every Muslim, African and Latin American nation – which have the most restrictive abortion laws in general – will have less restrictive laws than Northern Ireland.

A move to outlaw abortion altogether has recently gathered pace in Central America, causing considerable worldwide alarm – the progressive agenda is not meant to go into reverse.

Northern Ireland is arguably on this list as well: abortions have been getting steadily harder to obtain. In theory, UK-wide case law clears the way for a more open regime and test cases in the 1990s began to push the boundaries. Then devolution was restored and Stormont pushed back, using medical guidelines and legal warnings to frighten health workers into line.

DUP ministers have led with this, enthusiastically backed by the SDLP. Nobody else has exactly rushed to stop them.

Being stricter than Saudi Arabia on women’s reproductive rights – and becoming more so – would give most Westerners pause for thought. However, all anyone in Northern Ireland has had to do up to now is glance south for reassurance.

Conservatives can comfort themselves with the Republic’s example – a trick that seems to work as well for unionists as for nationalists.

Homosexuality was decriminalised in 1982, over a decade before the Republic (and only a year after Scotland) thanks to a legal challenge by a unionist politician

Liberals can console themselves that at least things could be worse.

This is an under-appreciated factor in keeping a lid on public exasperation.

For most of Northern Ireland’s existence, setting aside its constitutional disputes, the Republic has been a generation behind on landmark social policy issues.

Unionist councils might still have been tying the swings up on Sundays in the 1960s but contraception was available on the NHS.

Homosexuality was decriminalised in 1982, over a decade before the Republic (and only a year after Scotland) thanks to a legal challenge by a unionist politician.

Ireland’s ban on divorce was an incomprehensible cruelty and anachronism. I remember southern friends of friends telling us about the strange limbo lives of their separated parents. We listened with outward sympathy and inward satisfaction.

Abortion is the last point of comparison that still flatters Northern Ireland even slightly in these terms and that is about to be turned on its head. How will it feel to stand exposed as Iran on the Bann? How long can conservatives hold the line, when three-quarters of the population support same-sex marriage and the liberalisation of abortion law?

Sinn Féin is the first party to have spotted the coming social border, judging by its alignment of progressive policies north and south – but this is rather obviously a constitutional dispute by other means, extending a case for unification on to a new site for struggle, to use the republican expression.

The DUP has belatedly spied the danger, although its concern seems restricted to internal Northern Ireland politics. This week the party held its first official meeting with campaigners for same-sex marriage, which Sinn Féin has declared an issue in the restoration of Stormont.

It was in sharp contrast to Sinn Féin calls this week to 'stand up, mobilise and fight' on the same issue – vacuous belligerence that suddenly looks as outdated as a tied up swing

The DUP praised the meeting as “useful” and urged “respect and sensitivity on all sides” but it did not alter its opposition one iota.

The truly striking development was the conduct of the campaigners, an umbrella body comprising three gay rights groups, a students’ union, the Irish Congress of Trade Unions and Amnesty Northern Ireland.

The mainly young people involved acted with faultless professionalism. While describing the meeting as “disappointing”, they praised the DUP for engaging and were at pains to reassure religious conservatives – that is, DUP voters – that they want changes to civil marriage only and fully respect freedom of belief.

The focus of their lobbying was a technical yet critical point on reforming Stormont’s cross-community veto mechanism, which would allow a private member’s Bill on same-sex marriage to pass while enabling unionists to vote against according to conscience.

It was in sharp contrast to Sinn Féin calls this week to “stand up, mobilise and fight” on the same issue – vacuous belligerence that suddenly looks as outdated as a tied up swing.

Faced with a social border, could the post-ceasefire generation discover real social politics?

Everyone might drink to that – although not on Good Friday, because we have just fallen behind the Republic on alcohol licensing too.

1 ‘He was some man’: Shane’s journey from care child to fearless activist
2 Chris Hadfield on the climate crisis: ‘The world has seen much, much worse’
3 Mary Lou has to call for the smelling salts as SF councillor deals a knock-out blow
4 Netflix: The best 101 films to watch right now
5 The cost of a Dublin cottage refurb: ‘We struggled with the mortgage lending rules’
Real news has value SUBSCRIBE