Boris Johnson is a joke that isn’t funny anymore 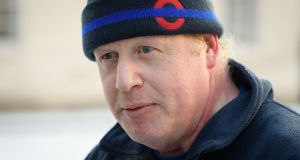 LONDON, ENGLAND - FEBRUARY 28: British Foreign Secretary Boris Johnson speaks to the media after jogging through St James Park on February 28, 2018 in London, England. A letter from Mr Johnson to the Prime Minister was leaked to the media yesterday, in which the Foreign Secretary stated that he believed that there would end up having to be some form of border between Ireland and Northern Ireland, post Brexit. (Photo by Leon Neal/Getty Images)

Upon leaving Eton, students are requested to write down in the college’s book their aims and aspirations in life before they journey forth to take their predetermined places at the heart of the English establishment. Some quote from the Gospels, some from the Classics. Boris Johnson wrote: “to secure more notches on my phallocratic phallus”.

It was Peak Boris - the carefully contrived winsome and “roguish” sense of humour. It was there again on Tuesday when he blithely referenced that the London congestion charge is proof that the post-Brexit Irish border issue can be resolved - he compared the border between the North and the Republic to the “border” between Camden and Islington.

Another notch secured there in people’s belief that he is indeed a phallus.

As Number 10 promptly “distanced” themselves from Boris’s belief that a hard border should be reintroduced - meaning Theresa May most likely has her Rolodex out looking for a replacement - the mockery of Boris (and not just his Baldrick-like cunning Irish border plan) is no longer confined to the Opposition benches.

Tory grandee Michael Heseltine sighed to the BBC yesterday of Boris that “one despairs, really” while pointing out that only last November, Boris had told the House of Commons that “There can be no return to a hard border. That would be unthinkable, and it would be economic and political madness”.

Former Conservative Cabinet Minister, Chris Patten shudders at the very thought of Boris as the UK’s Foreign Secretary saying “This is an office once held by people such as Carrington, Douglas-Home and Bevin. What on Earth has become of us?”

With even the right-wing tabloids speaking of the Foreign Secretary’s political “ignorance” this morning, the consensus is that Boris Johnson is a joke that isn’t funny anymore.

Boris may cling to the belief that he has assembled a personage pieced together from P.G. Wodehouse and Evelyn Waugh characters but he strikes us now, not even charitably as a Hugh Grant character in a Richard Curtis film, but as Mr. Bean.

Politics has always been a bit of a jolly good jape for Boris - something for him to do while waiting for the term “media personality” to be invented.

Ironically, Brussels made him - it was while there as the Daily Telegraph’s EU correspondent in the 1990’s that he discovered he could move from being a minor figure of Oxford’s Bullingdon Club to - as he put it himself - “having a sense of power”.

Boris’s dispatches from Brussels made Margaret Thatcher purr. He wrote in the Telegraph about how the European Commission planned to introduce harmonised “Euro coffins”; how the UK’s Prawn Cocktail crisps would be banned; about the EU threat to the great British sausage and how Brussels were introducing a “banana police force”.

He had found a stand-up routine - journalistic riffs about the size of EU condoms etc - that worked, but the jokes were lost in translation somewhere over the English Channel.

As he explained to Sue Lawley on Desert Island Discs a few years ago: “I was sort of chucking these rocks over the garden wall and I listened to this amazing crash from the greenhouse next door over in England as everything I wrote from Brussels was having this amazing, explosive effect on the Tory party, and it really gave me this, I suppose, rather weird sense of power”.

As some indication of what Boris’s true feelings on the EU are, even while the UK’s Referendum Campaign was in full swing, he admitted that he had written two columns for the Telegraph - one backing Remain, the other Leave.

The widespread belief is that he only pressed the send button on the Leave column as he thought it would put him in pole position to lead a Eurosceptic Tory party.

Boris never got high on his own supply of comic Euroscepticism - it’s just his routines got him out of performing in expat Brussels boozers and into headlining National arenas.

Boris in now in a punchline he can’t get out of. When the reality of political life intrudes - a hard border in Ireland - he reverts to type and tries to quip his way around it. But we’ve heard the joke before,

And when comedy, like history, repeats itself - it’s first as tragedy, then as farce.