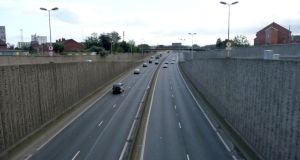 Belfast’s Westlink dual carriageway. “A motorway between Belfast and Derry might have a weak financial case but as a way to knit Northern Ireland together it would have been unsurpassed.”

In the week leading up to Stormont talks, which restarted yesterday, the topic that captured imaginations in Northern Ireland was a bridge to Scotland.

The topic arose after British foreign secretary Boris Johnson proposed a bridge across the English Channel, during a summit last Thursday with French president Emmanuel Macron.

Johnson was immediately accused of a headline-grabbing stunt and if that was his aim it was successful – the UK media led with his impromptu notion for days. In the midst of this, the Europe correspondent of the London Independent, Jon Stone, proposed a bridge between Northern Ireland and Scotland as a tongue-in-cheek alternative, linking Edinburgh, Glasgow, Belfast and Dublin by high-speed rail.

Imaginations were fired all over again, with the Scottish and Northern Irish media taking the matter almost seriously. Discussions focused on politics as well as engineering and economics – commissioning a feasibility study into a North Channel bridge or tunnel was in the DUP’s 2015 Westminster manifesto, and the party is explicit in stating the project’s unionist symbolism.

On the other hand, Scotland’s independence-supporting newspaper the National splashed the idea across its front page as a way to create a “Celtic powerhouse”.

What can be said for certain is that great engineering projects, however implausible, have a power to fascinate and inspire that extends to reimagining the nation.

This is one of the oldest insights in human civilisation and should scarcely need to be stated – but an interest in infrastructure for its own sake has become so frowned upon in polite company the case for it still has to be made. At best, such an enthusiasm is seen as eccentric, trite and selfish – there are always more deserving causes on which to spend a fortune.

At worst, monumental engineering conveys undertones of autocracy, ancient and modern. Former French president François Mitterrand gets a pass for his “grand projets”, as they were mainly enormous art galleries. Johnson’s flights of fantasy – sea-spanning bridges, airports on artificial islands – owe more to the pyramids of Giza than the pyramid at the Louvre.

Ireland and Northern Ireland have been badly served by disdain for literal nation-building.

Construction of motorways in the Republic over the past two decades – a fairly explicit part of European Union empire building – has transformed perceptions across the island, changing how the Republic sees itself and how the North sees the South.

Better roads were once a defining characteristic of Northern Ireland and a point of unionist pride. That has all evaporated – but, as ancient autocrats knew, grand projects inspire positive reassessments. I have never heard anyone in Northern Ireland, unionist or otherwise, express anything but admiration for the Republic’s new motorways. When concerns are voiced about Northern Ireland falling behind, this takes the form of complaints against Stormont rather than resentment of the neighbours.

Nationalists tend to fetishise cross-Border infrastructure as a prerequisite for drawing North and South together. Sinn Féin has strongly lobbied for a Dublin-to-Letterkenny dual carriageway, passing through Northern Ireland. Support for a faster Belfast-Dublin rail link extends across the political spectrum.

While projects such as this have their place, the motorway programme shows major civil engineering within the Republic alone can profoundly affect opinion in the North. If a fraction of the intellectual effort devoted to a united Ireland was focused on straightforward physical progress, how much more might attitudes be transformed?

Northern Ireland provides the negative illustration – it has never collectively inspired itself in concrete and steel. Its motorways and railways peter out at the river Bann, the new city of Craigavon had a divisive name and location and siting a new university at Coleraine was so controversial it inspired the formation of the SDLP and the Civil Rights Association.

Nationalists blame all this on sectarianism, past and present. Unionists can point to cast-iron economic arguments in their defence. There are few railways in the west of Northern Ireland for the same reason there are few in the west of the Republic – small towns and scattered populations cannot justify them. Coleraine was selected by a panel of English experts, brought in on the condition their decision would be binding.

Yet unionists were far too happy to accept these dry arguments in the past and have done nothing to see beyond them in the present.

A motorway between Belfast and Derry might have a weak financial case but as a way to knit Northern Ireland together it would have been unsurpassed. Merely upgrading the existing single-track railway to an hourly service remains a 20-year unfinished saga. Thanks to the Letterkenny dual carriageway, the nationalist west could have a motorway to Dublin before it has one to Belfast – a prospect whose political significance is lost on nobody. Now it feels too late to bring east and west together. In every sense of the term, unionism has failed to build a nation.