Dublin: urban chaos and a failure to plan 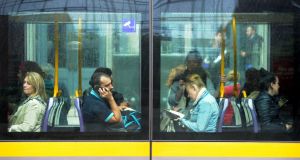 It is hard to see how both metro trains and Luas trams could be accommodated on the existing Luas Green Line without the latter becoming redundant. Photograph: Aidan Crawley

Transport planning in Dublin over the past 40 years has a chaotic history, with ambitious schemes drawn up and then pigeonholed or chopped and changed, depending on the mind-set of whatever Government has been in power at any given time. Way back in 1975, the Dublin Rail Rapid Transit Study recommended linking up all of the existing suburban rail services with an underground station just west of the former Central Bank, in what we now know as Temple Bar. The electrification of the Howth-Bray line, completed in 1984, was meant to be the first phase of this grand projet, but three years later the then Fianna Fáil Government decided not to proceed with the rest of it, on cost grounds.

Instead, in 1993, the Dublin Transport Initiative proposed a three-branch light rail network serving Ballymun, Tallaght and Dundrum. Ballymun was dropped and, in 1998, the Government decided to proceed with two free-standing light rail lines serving Tallaght and Sandyford, with a notion that they might be connected in future by an underground link. This was finally unveiled in 2002, with St Stephen’s Green billed as Dublin’s equivalent of Grand Central Station in New York City. Even before Luas trams started running on the Red and Green lines, the latter was mooted for upgrading to a metro linking St Stephen’s Green to Dublin Airport and Swords. Simultaneously, CIÉ was planning Dart Underground, between Heuston Station and Docklands, to link up all of the disparate suburban rail services, while plans were being hatched by the Railway Procurement Agency for Luas Cross City.

As the recession took hold, then minister for transport Leo Varadkar decided in 2011 that only the Luas project would proceed in the short-term, even though a metro station box had already been installed beneath the Mater Hospital at a cost of €25 million. That’s one of the reasons why metro has now been prioritised over the much more strategic Dart Underground project, although the National Development Plan 2018-2027 provides for the electrification of lines serving Maynooth, Kildare and Dundalk – without the crucial city centre tunnel that’s needed to transform all suburban rail services into a network.

Revisions to the €3 billion metro project look set to spare St Stephen’s Green from being turned into a huge hole in the ground, but it is hard to see how both metro trains and Luas trams could be accommodated on the existing Green Line without the latter becoming redundant. With a completion date of 2027, we shall have to wait and see. In the meantime, within the city centre, cars, trams, buses, taxis, vans, bicycles and pedestrians all jostle for position in a dystopian picture of urban chaos, largely due to the failures of successive governments to plan for the future.

5 Michelin stars 2021: The Irish restaurants in the running