Brexit: Brussels forces a reckoning on the Border 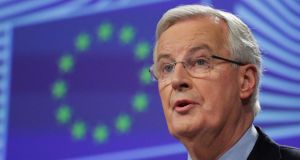 When divorce talks between the European Union and the United Kingdom were at risk of being derailed by an impasse over the Border last December, the two sides bought themselves time by way of a classic political fudge. Their preference, they agreed, was to avoid a hard border through a comprehensive EU-UK free trade agremement or, failing that, by way of technological and other solutions that London maintains – to widespread scepticism – that it can come up with.

If neither of those scenarios materialised, however, the fallback – known as “Option C” – would kick in: the UK would ensure full alignment of the rules on both sides of the Border as they pertained to the single market and the customs union. That implied that Northern Ireland would remain within the EU’s economic orbit. But to placate the Democratic Unionist Party (DUP), on which the Conservative government in London depends for its survival, the document also stipulated that there would be no barriers to trade flowing freely between Britain and the North.

The obvious contradiction in the British position remained unresolved, however. Its three stated ambitions – to avoid a hard Border, leave the customs union and ensure there are no barriers or checks on goods moving between Britain and the North – are mutually irreconcilable. At some point, therefore, we were bound to hit a reckoning. And it came yesterday, when the European Commission published a 120-page draft legal text to implement December’s divorce deal.

It strips away the fudge in clear and unambiguous terms. It states that the so-called backstop, or Option C, means that Northern Ireland will be considered part of the EU’s customs territory, with checks required on goods crossing the Irish Sea from Britain. A hard Border will be avoided by maintaining “full alignment” of regulatory regimes between the North and the Republic.

The Government in Dublin is right to argue that this is the logical conclusion of December’s divorce agreement. But Theresa May may also be right in thinking that, given the sway held by Brexiteers over her cabinet and her party, not to mention the DUP’s current influence, she could struggle to survive as British prime minister if she agreed to the latest text.

Yet the commission – fully supported, it should be stressed, by the entire EU27 – is only forcing London to confront the contradictions of its own position and its failure to level with its own people. It is also seeking to apply some pressure at a time of growing European exasperation with the British government’s failure to engage. The backstop is exactly that – it will only come into play if all else fails. By underlining to London how unattractive it looks, Brussels is nudging London closer to the compromises it must swallow if a comprehensive deal is to be agreed.

1 Child (4) died of viral infection following nap at Cork creche
2 Miriam Lord: Does anyone care if Leo smoked or snorted?
3 A vegetarian and a non-drinker visit Ireland: here’s their verdict
4 Fintan O’Toole: Historians will not believe sheer ignorance of Brexit supporters
5 Man tested for symptoms linked to coronavirus in Belfast
Real news has value SUBSCRIBE