The British public is disconnected from the reality of Brexit 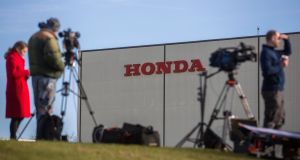 Media gathered outside the Honda plant in Swindon, England. “What are we like 44 days away from Brexit and they haven’t got a clue!” said a Honda worker. “They can’t even decide for themselves what Brexit means! This is idiocy of epic proportions.” Photograph: Bloomberg

Living in the UK since the Brexit referendum, one hears many a witty quip at the expense of the main politicians responsible for making it happen. Across the UK panel shows, comedians, journalists and satirists have ensured that Theresa May, Nigel Farage, the ERG, Jeremy Corbyn and Boris Johnson have all come in for a good old ribbing.

Actor Andy Serkis created a hilariously horrific character combo of May and his old part of Gollum from the Lord of the Rings brooding over Brexit as if it was the One Ring of Power.

As with any Irish person, it can feel strange to give the English credit, but as far as taking the proverbial out of themselves, they are superb at that. We can at least give them that much.

Yet while British society is expert at mocking itself, sincere expressions of emotion about the jeopardy the country is facing have been few and far between. Perhaps in such times jokes are an easier way to make yourself heard without exposing your own vulnerabilities.

And the UK is not a society that is comfortable with people talking about their feelings.

Remember when the Sun reported that years after Princess Diana’s death, Prince Harry went to speak to a counsellor about the grief he was still feeling?

The implication of the article was, of course, that the bereaved boy was a threat to national security by engaging with a healthcare professional instead of going down the traditional route of maintaining a stiff upper lip and developing a good old dependency on alcohol or sex or food to manage the grief at his mother’s death.

Honda this week announced the closure of a car manufacturing plant in Swindon which will mean the loss of 3,000 jobs to the city, and the interview of one employee while leaving the factory was riveting. It was a rare moment when an English person broke free of the societal code of inhibition and reserve in a completely free and uninhibited way, let out the anger and sheer frustration they were feeling.

“What are we like 44 days away from Brexit and they haven’t got a clue!” he said. “ They can’t even decide for themselves what Brexit means! This is idiocy of epic proportions.”

The bicycle helmet he was wearing only added to his credibility. A man who can still think about saving the planet when he has got news of losing his job of 24 years deserves our attention.

The man’s words were a direct attack on the British political class’s handling of the matter, and all the more powerful because it was from someone who is directly affected.

So many of the voices both for and against Brexit have that measured tone of people for whom the battle is one of pride rather than survival.

Of course Brexit supporters were quick to defend their “precious” ideology, providing all sorts of alternative explanations for why the factory closure might be happening, but none of them succeeded in recommending any useful way in which the city might cope with the devastation.

Of course if Brexit does decimate the entire car industry then Henry Ford himself will be blamed for inventing a machine that was so weak as to be subject to trade tariffs.

These distortions of the political situation in the UK are having a cumulative impact. They are creating a looming disconnect between the UK public and the consequences of leaving the EU.

Those in favour of Brexit are doing their best to ensure that remains so. May has suppressed reports from her own civil service that concluded that immigration makes a positive contribution to the UK economy.

When a UN envoy wrote a damning report about the level of poverty that exists in the UK– surely an argument for having as soft a Brexit as possible – instead of using the information gathered, the Conservative Party rejected it as outright lies.

From Isis brides to off-hand comments from EU politicians, anything that can be thrown into the mix to obscure the truth is being used.

There are politicians for whom a well-informed public is now the enemy. And this is more than alarming.

The good news, however, is that there is at least a limit to how long these playboys can continue to distract the public from reality. There is less than 1,000 hours until the moment the UK leaves, and for ordinary workers at least then, while they might not like it, they will have an answer to the “what is Brexit?” question.

Until then I guess the only people who can really answer it are from Swindon. And what they have to say isn’t reassuring.

1 Why are markets booming when a crash is on the way?
2 Open Ireland as soon as possible - Tourism chief warns of 'catastrophic' impact of pandemic
3 Bobby Storey: The IRA's planner and enforcer who stayed in the shadows
4 ‘Ten of the best books set in Ireland’: Does the Guardian get it right?
5 Irish holidaymakers have been thrown under the bus
Real news has value SUBSCRIBE