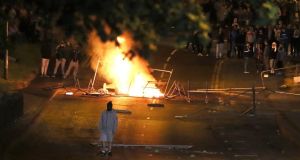 An orange lily is flowering in Creggan estate in Derry. It was found by women clearing a derelict corner, and they made it the centrepiece of a rockery. Last week a group of women from all over the city stood around it to celebrate the life of Christine Hart, who died last month of cancer.

Christine was from Bond Street, across the River Foyle in the Waterside, where orange lilies are on proud display at this time of year in the lapels of marching Orangemen. When she first came to Creggan, as part of a brilliant community project called Unheard Voices, she admitted she was terrified of the place. “I thought I’d have got my head kicked in,” she said. Instead she made fast friends, and they produced a book together about their lives. The women made a collection and donated it to Foyle Hospice in her honour.

A group of tourists stood gazing up at the big mural of the child in a gas mask about to throw a petrol bomb. The city walls, cannons poking out, were behind them

Creggan is high up on the west bank of Derry. Below it lies the Bogside, where, yesterday morning, the tourists were back. A group of them stood gazing up at the big mural of the child in a gas mask about to throw a petrol bomb. The city walls, black-muzzled cannons poking out, were behind them. They were listening to one of the artists talking about civil rights and 1968. Free Derry corner is across the road, the Bloody Sunday museum is round the corner, and monuments to republican martyrs are dotted about. Outside the Bogside Inn a few agitated middle-aged men paced about, smoking, and waited for opening time.

Meenan Square is behind the pub. To get in you have to step through a narrow gap that has been forced in the corrugated-steel fence that surrounds it. It is a scene of misery. Charred heaps of junk, beer cans, wooden pallets littered about, the walls of derelict shop units scrawled with graffiti celebrating dissident republican “armies”.

This is a haunt for some of the young people who were caught up in last week’s violence. It is also the place where men from those organisations have required young people to turn up to be shot in the knees or feet when they are deemed guilty of antisocial behaviour. Utterly bleak. Derry’s councillors discussed demolishing it when they met on Monday. Local community groups have long demanded that it be regenerated.

Among those who have appeared in court this week charged in connection with the rioting is one child who had been reported missing six days before the violence. His solicitor said he was seeking somewhere for him to stay while on bail. Another of the boys was charged with possession of and intent to supply cannabis and cocaine. A 22-year-old was charged with intent to endanger life and with indecent exposure. One of the most shocking incidents involved a boy with a lit petrol bomb trying to smash the windscreen of a van, the face of the driver inside clearly visible to him.

It is not easy to feel compassion for a child whose face is contorted by hatred. But it is necessary

The DUP leader, Arlene Foster, came to Derry last week, as did Sinn Féin’s Northern Ireland leader, Michelle O’Neill, and Tánaiste Simon Coveney. Along with the SDLP and the UUP, they declared themselves united in condemning the violence. Foster suggested that a higher fence be built around the Fountain estate, whose Protestant residents came under attack last week. Coveney had talks with local people and then moved on to Foyle Maritime Festival. The waterfront was buzzing, with crowds of people admiring the clipper fleet. “This is the real Derry,” the smiling Tánaiste declared.

Yes, it is. Derry is brilliant. It is full of vibrant young people. Derry Girls was the best television series ever. The mountains of Donegal look beautiful from the Peace Bridge.

But Meenan Square is the real Derry too. So are some of the stories in the Unheard Voices book about addiction and domestic violence. So is the unemployment rate in this economically stagnant city. The DUP is keener on a bridge to Scotland than a decent road to the North’s second city.

Upriver from the Peace Bridge, towards Lough Foyle, the river is spanned by another handsome bridge, but this one, sadly, has become notorious as a place from which desperate people leap to their deaths. Foyle Search and Rescue has had to undertake many terrible missions. At least six suicides a week are recorded in the North as a whole, and young men in Derry are particularly vulnerable. There are ongoing discussions about raising the height of the fence on the bridge, to try to prevent further tragic incidents.

The politicians went their separate ways. It was the Catholic Bishop of Derry, Donal McKeown, who went deeper, describing last week’s events as the “manifestation of a greater malaise”. It is not easy to feel compassion for a child whose face is contorted by hatred. But it is necessary. We have to tackle the legacy of our history, and invest in reconciliation. No fence can contain the absence of hope. Somehow, though, that orange lily in Creggan made me feel a little better this week about my home town.

1 Asylum claims by Georgians and Albanians brought to abrupt halt
2 Miriam Lord: Does anyone care if Leo smoked or snorted?
3 Hilary Fannin: What I wish my spouse and I had done the morning of our wedding
4 Fresh delays and millions in extra costs for children’s hospital revealed
5 Housing crisis: Seven solutions to Ireland’s biggest problem
Real news has value SUBSCRIBE