The Irish Times view on the US supreme court nomination: Veering right 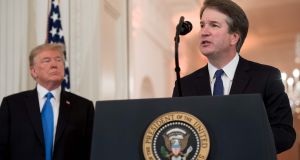 US Judge Brett Kavanaugh speaks after being nominated by US president Donald Trump to the supreme court in the East Room of the White House on Monday. Photograph: Saul Loeb/AFP/Getty Images

There are few more damning illustrations of how political divisions are degrading American public life than the circus that appointments to the supreme court have become. With President Donald Trump’s selection of Brett Kavanaugh to replace the retiring Anthony Kennedy, the court’s swing-vote on social issues, the stakes are even higher than usual. That will ensure a bitter battle that could stretch all the way to the midterm elections in November.

The problem is partly the constitutional structure itself. Because it is so difficult to change the US constitution, the document is virtually unamendable. That gives vast, excessive power to the unelected members of the supreme court. They may claim to be above politics. They may insist, as Kavanaugh did on Monday, that their role is to interpret the law and not to make it. But the court’s composition, and its decisions, are transparently ideological – so much so that it is relatively straightforward to anticipate how most if not all of the nine justices will vote on a given topic.

Conservatives were quicker than liberals to recognise that this made the supreme court a vital tool in the prosecution of the culture wars. Since the 1980s, a network of think tanks and activists, funded by wealthy conservatives, have worked to build up a cadre of right-wing judges in courts across the country and to pressurise Republican administrations to pick supreme court nominees from ready-made lists of candidates regarded as reliably conservative. Their aim has been to avoid the disappointment they felt after Republican nominees such as Sandra Day O’Connor or Kennedy himself turned out to be more moderate than expected on the bench.

Kavanaugh, whose record suggests a rigid, doctrinaire conservative, emerged from that process, his name having appeared on a list drafted by the Heritage Foundation and adopted by Trump during his presidential campaign. The Democrats’ attempt to thwart his appointment will likely be in vain, leaving the path clear for an appointment that could well ensure a conservative majority on the court for a generation.

1 In six months we will be in the grip of a 1980s-style recession
2 ‘I saw young girls get kicked, hit, sprayed and dragged off gasping for air’
3 Coronavirus: A further three deaths and 47 new cases reported in the State
4 Donohoe warns of cost to State of pandemic measures as public finances deteriorate
5 Black Lives Matter protest planned for Dublin is cancelled
Real news has value SUBSCRIBE