When Britain joined the EU it realised the stakes. Now it is mired in petty politicking

The Brexit dream turned to a walking nightmare with the resignations of two cabinet ministers Boris Johnson and David Davis. 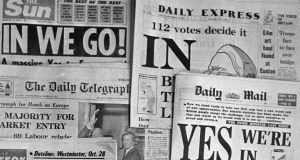 How many people have read last week’s British government White Paper on the UK’s future relationship with the European Union? It is, after all, both at the centre of an immediate drama – the resignations of David Davis and Boris Johnson – and of immense consequence to the lives of everyone in the United Kingdom. Yet I would guess: not very many. People will certainly have read about it and probably tuned in to discussions on TV and radio. But the thing itself? Why bother?

In July 1971 the British government published what may come to be regarded as the bookend at the far side of the shelf: the White Paper on its proposal to join what was then called the European Communities, or the Common Market. We might assume that nobody much read that either. But we’d be wrong. When it went on sale there were queues outside bookshops. It sold more than a million copies, making it the bestselling official document in British history.

That month, 100,000 people a week paid their 25p for a copy. This was not because the British were surfing a wave of Euro enthusiasm – they were deeply ambivalent about the whole business. But they knew that they were at a very profound moment in their history, and this document spoke to that moment.

If you read the two White Papers side by side what is most striking is how much less boring the 1971 document is than its 2018 counterpart. There is a good reason for this: the 1971 White Paper has a deeply serious sense of what is at stake. It has plenty of boring stuff – transitional arrangements and qualified-majority voting and cumulative tariff reductions and special arrangements for New Zealand dairy products. But at its heart it asks the really big question: what is our place in the world?

The 1971 document admits that Britain made a mistake in not joining with the six founder members of the Common Market in the 1950s, and that it has paid a heavy price

As outsiders we tend to see the Brits as being stuck with postimperial delusions of grandeur – and there is plenty of recent evidence to justify the caricature. But this is not the way it was in 1971. On the contrary, the White Paper’s argument for entry to the Common Market is based on a realistically downbeat assessment of Britain’s loss of status after the triumph of the second World War: “During the 1950s, the transformation of our position in the world was increasingly borne in upon us, in terms of recurring economic problems at home and in the balance of payments, of the quickening move to independence among former colonies and of a sense of diminishing influence in world counsels.”

The 1971 document is a kind of confession: it admits that Britain made a mistake in not joining with the six founder members of the Common Market in the 1950s, and that it has paid a heavy price. Of those six countries it says: “The contrast between their experiences in recent years as members of the Communities, and ours outside, when our resources have not been growing sufficiently to do all we should like to do at home and abroad, suggests that they chose the right road.”

It is blunt about Britain’s economic decline relative to the members of the Common Market: “All the Community countries enjoyed rates of growth of gross national product (GNP) per head of population, or of private consumption per head, roughly twice as great as Britain’s.”

Above all, the 1971 White Paper asks British people to reflect on their place in a postimperial world, where there are two superpowers – the United States and the Soviet Union – and (presciently) a third about to emerge, in China. If, it says in its most eloquent passage, Britain decides not to join Europe, “In a single generation we should have renounced an imperial past and rejected a European future. Our friends everywhere would be dismayed. They would rightly be as uncertain as ourselves about our future role and place in the world . . .” What an extraordinarily poignant and honest phrase that is for a country that once ruled half the planet: as uncertain as ourselves about our place in the world.

Now turn to last week’s White Paper and look for any equivalent reflection of where the UK is now. You simply won’t find it. The phrase “place in the world” occurs just once, in a single jumbled sentence with no substance whatsoever. This White Paper is merely a desperate attempt to triangulate between the Brexit ultras and the realities of a negotiated settlement. It uses the word “vision” 12 times, but it doesn’t actually have one.

In particular, it has no self-perception, no attempt at a widescreen view of the country and where it sits in time and place. Given how consequential it is, it is an extraordinarily petty document. It really is boring – and not because of technical detail (of which there is any case very little) but because it has absolutely no sense of where this moment sits on a line between Britain’s past and its future.

The 1971 White Paper had the guts to say a very hard thing: if you renounce an imperial past but fail to embrace a European future you will find yourself nowhere much. The 2018 White Paper is merely a rough map of that nowhere.